Death on the New Bridge: Chapter 30

It was much later, well into the quieter part of the evening, and even some of the adult members of Bret's family had already gone to bed. Just Bret and her mother remained at the fireside with Kevin and Tanji.

Their first visit together to Bret's family home had been such a relaxed event, one which would be long remembered and frequently referred to in future years. One incident which stuck in Kevin's mind began when Bret picked up one of the magical picture-frames that he had seen before and gestured at it for a few moments. She then turned to show Kevin the image on its face. 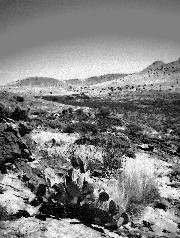 "This is a place in your world," she said, handing the framed picture to Kevin for inspection.

The image showed a series of high mountain ranges, sun-baked and weathered, fronted by a region of scrubland dotted with rough grasses and creosote bushes. Occasional patches of thorn-bushes marked out dry gullies, worn by the very occasional heavy rain to which the area would be subjected. There would be trails and high passes in the mountains, Kevin imagined, which would have been used by wagon trains in times past.

He had only seen this kind of country in cowboy films and westerns. Even so, the images in the picture frame, together with his own imagination invoked by Bret's words were enough to form a clear picture in his mind's eye.

Bret sipped contemplatively at her wine glass then sat back comfortably to spin them another tale.

"Nowadays, this region is a semi-desert, dusty and infertile," she began, "Oh, there are a few natural springs in the low hills, and fewer still concealed by rocky outcrops in the passes. And there is still water, good water, underground where Artesian wells can draw it out."

She paused, taking another sip, then continued.

"This area is mostly uninhabited and indeed mostly inaccessible - the trails are passable only with difficulty, even with four-wheel drive vehicles."

She drew a deep breath, almost a sigh.

"In ancient times," she resumed, "This area was occupied by a group of Native American tribes, a region now represented by the American South West - West Texas and New Mexico - as well as Mexico itself. They lived peacefully enough in this region for thousands of years, and then suddenly disappeared about 1600 years ago."

Kevin was unsure where this story was going, but the combination of the good meal, the excellent wine and the warm fireside meant that he was happy enough to just sit and listen to Bret.

"These tribes left behind a few artefacts, and some carvings on rocks remain in sheltered places. Scholars and research workers in your world have identified these archaeological remains. The peoples had lived a Stone Age life: working stone for arrowheads and basic tools as well as woven blankets, clothes and baskets, and simple pottery for cooking and storage."

"But that's about all that is known for sure about these tribes," she continued, adding tantalisingly, "At least in your world."

Kevin's ears pricked up at this point.

"But you know something more, do you?"

"We do," she confirmed, "For a start, we know that the country was much wetter then."

She retrieved the picture frame and waved it in Kevin's direction.

"As you can see, it is now an arid semi-desert, barely able to support a few cows or buffalo. Then, it was quite different. The region was a vast system of shallow lakes teeming with life, with fish, turtles, and so on in the water and abundant plant life around the margins. In the reed beds, insects and the birds that fed on them could be trapped, while in the higher parts, deer - or perhaps antelopes - could be tracked down by hunters skilled with bow and arrow. A paradise, perhaps - and certainly one that had remained unchanged for thousands of years."

Kevin was surprisingly alert, given the lateness of the hour.

"It's another rather shameful part of the history of the Two Worlds," she admitted, "This region was the site of a battle, a war for the control of a crossing between the Worlds."

"One faction - let's call them the Empire-builders - in an act of blatant imperialism, wanted to colonise this rich and fertile area in your world. This faction planned to drive out or, if necessary, kill the peaceful natives, who would have been helpless against the weapons and magic that would be ranged against them. The Empire-builders would be virtually unopposed, and the aborigines were likely to be wiped out, extinct within a generation."

It was quiet in the room as Kevin cogitated, just the gentle crackling of the logs in the fireplace.

"All this would have come to pass," Bret resumed, "If it were not for the aid, covert at first, of the second faction, which I shall call the Resistance. At first the Resistance attempted to advise the indigenous peoples, appearing as spirits and demigods from time to time to warn them of the impending invasion, casting their warnings as news of battles in another plane. The natives were awed and fearful, helpless; their only option was to run away, to abandon the fertile lakesides for the uncertainties of the arid mountains and the desert beyond."

"In time, the Resistance offered more direct assistance and the tribes in your world were split asunder. Some brave - or perhaps foolhardy - souls decided to stay in your world and to run away from the invasion. These few became the founders of the tribes which made up, in time, the Apache Nation."

Kevin was listening most intently now. The Ferryman looked on impassively, an unreadable expression on her face, while Tanji seemed almost asleep, curled cat-like on the sofa with her head on Kevin's shoulder. Bret took another sip of her wine, then continued with the tale.

"The other, larger, group accepted an offer from the Resistance faction to cross to the Other World and were spirited away, so to speak, through the crossing - under the very noses of the Empire-builders. This was a major undertaking - moving thousands - perhaps tens of thousands of strangers, primitives, between the worlds in small enough groups that they did not arouse suspicion."

She paused again, staring at the dancing flames for a long moment.

"It couldn't last. The involvement of the Resistance faction was supposed to be a secret, but the Empire-builders found out what was going on and moved swiftly to stop the flow of refugees. How they found out was never made clear, but the action of a traitor has long been suspected."

"Continuing to feel a moral obligation to help the indigenous peoples, the Resistance were forced to take more direct action, although always trying to avoid war or active military involvement. This would have been a poor strategy against an aggressive and much more powerful neighbouring state."

"The Resistance faction was increasingly supported by a number of - in some cases, rather reluctant - allies in our world. Some groups of nations altogether more powerful even than the Empire-builders began to indicate their displeasure at the threatened genocide, while others were frankly fearful of the dangers from a strengthened and aggressive bloc."

"The Empire-builders never actually declared war, in the end, and the world powers interceded, supporting the Resistance in attempting to negotiate a peaceful settlement. However, while the negotiations were going on, renegade actions within the Resistance faction wrested the, well, Keys of Control for the crossing from the local crossing guards. With this powerful magic, they were able to sabotage the crossing."

Kevin gasped, as did Tanji, showing that she had not been quite as asleep as he had supposed.

"The crossing was explosively destroyed. The explosion blew up an entire mountain and, more importantly, disrupted the basin which formed the north-east edge of the system of lakes. The water drained away, rapidly drying out and depositing sand and mud over a vast low-lying area."

"The waters of the lakes, although not brackish, certainly contained a high concentration of dissolved minerals. These salts were deposited along with the silt, and later formed the astonishing brilliant white sand dunes now known as the White Sands National Monument."

Kevin had heard of this, in a vague way, and he also knew that this natural phenomenon was inside the boundaries of the world's largest military installation - the White Sands Missile Range of the United States of America. Perhaps he should not be surprised, he mused silently, that a most unusual geological formation should have been formed by a less than entirely natural event.

"For a long time - many, many generations - the lost ancestors of the Apache peoples in my World were able to keep some contact with their relations in you world," Bret continued, "Using temporary portals and other magical items constructed during the building of the now-destroyed crossing."

"This really only stopped when Europeans - first the Spanish and later the Anglo settlers - started appearing in the region. There were just too many rumours and - well, you would say leaks, these days - to risk discovery, and the descendants of the immigrants reluctantly abandoned even the most cursory of contacts with their long-lost relatives."

Kevin thought about this. He could easily imagine a nomadic tribespeople maintaining their oral tradition - spirit guides and ancestral presences from another world - for a thousand years. This would be especially straightforward in the presence of tangible demonstrations of such communications mediated, no doubt, by Shamans and spiritual leaders, their secrets handed down from father to son, master to apprentice, over the generations.

"You have to have some sympathy with the fate of the American Natives who were cast out of their Eden - an idyllic and tranquil oasis by all accounts - and forced to be nomads and wanderers for evermore."

Kevin had to agree. This story certainly explained the war-like nature of the Indian tribes that resisted the Spanish conquistadors and later the Anglo settlers and cowboys for so long. Their folk memories of threats and invasion from a far distant place would have made them wary - even verging on paranoid - of the motives of strangers.

Kevin also wondered about some of the other stories he had heard about the region. The fabled golden city of El Dorado, for example, rumours of which had travelled everywhere and made a vast impact, even distortions of the history of his world.

When the Spaniards came to the Americas, their colonisation efforts must have been a disaster for the native inhabitants. But for the Conquistadors themselves, the principal motivation was the search for gold. What they found was indeed an even worse disaster: they found lots and lots of gold, and took most of it back to Spain. The Spanish thought they were importing wealth, but they were wrong - they were merely importing money, which caused rampant inflation, famine and immense distress in the populace. The political fallout reduced Spain's power and influence in Europe dramatically. Was it, Kevin wondered, a particularly exquisite punishment - being doomed as a nation to a second-rate position of power, by being given a surfeit of exactly what they were looking for.

Bret and her mother were silent for a long moment. Tanji appeared to be close to sleep again.

"Still, one good thing which did come out of all this madness," the ferryman herself spoke suddenly, speaking softly against the silence.

"What's that?" Kevin asked in a whisper.

"It was a sea-change in the politics in this World, leading to the separation of the control of the crossings - all of them - from national governments. It led to the establishment of the Board of Control and the hierarchy of subsidiary Boards and Guilds as separate entities, not answerable to any individual nation or state, and with its own internal system of checks and balances."

She paused, looking from Kevin to Bret and back again.

"It is a fine tradition, and one which has served us exceptionally well all this time."