Death on the New Bridge: Chapter 29

The instruction came from the Ferryman herself. Bret stopped immediately, turning to face his mother, the other two following suit a fraction of a second later.

"You need to be careful out there," she instructed sternly, looking directly at her son.

"I am not going to permit you - any of you," she added, taking in Tanji and Bret with one sweep of her eyes, "to put yourselves at risk. You will travel with assistance from the Guardians."

Bret again nodded his agreement while smiling characteristically wryly at the concern being so maternally expressed. Kevin was also amused, although there was a slight undercurrent, he thought, of real risk and an equally worrying suggestion of a slightly cavalier attitude to that peril.

In any case, the Ferryman's instruction was followed to the letter, at least as it seemed to Kevin. A group from the squad of Guardians currently stationed at the Ferryman's residence appeared at the doorway in response to some unseen signal. Bret spoke to the escort - two men and a woman - in a voice too low for Kevin to hear, then turned and said in a tone ringing with steely determination, "Let's get going, then."

The Guardians escorted Bret, Tanji and Kevin to the portal building and through the transportation network to the crossing with a minimum of fuss and a complete absence of incident. The group hiked over the causeway and old bridge at a fast pace, a cool morning breeze in their faces. Bret seemed in a sombre mood and strode ahead as if anxious to face whatever perils lay in his future. The Guardians were silent and professionally wary; there was no chatter or unnecessary sound.

Kevin and Tanji strode hand-in-hand, occasionally breaking into a half-jog as they struggled to keep up with the pace set by Bret. On the way towards the bridge, Kevin thought he could detect a certain amount of concentration, even tension, emanating from Tanji. Belatedly, he realised what she was doing: using her shapeshifting abilities to darken her hair and make subtle changes to the contours of her face, forming an appearance which, although familiar to Kevin, would probably conform more closely to average appearance in the other world.

Bret was already in his male guise, as he had been for all of the last few days. He had made no further changes as far as Kevin could perceive. Bret's current form would be regarded as only slightly outlandish in his own world and, Kevin suspected, he had entirely forgotten about his own appearance. 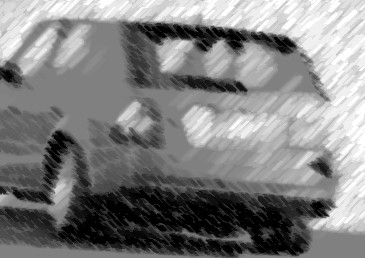 At the point where the causeway met the Northumberland coast, the party was met by the old Sergeant from Cliviger Grange that Kevin had already met, two other younger Guardians - unknown to Kevin, but both clearly acquainted with Bret - and two drivers, for the identical pair of black Range Rovers from the fleet managed by RDTE.

Sergeant Graves nodded curtly at his colleagues from the Other World, then urged Tanji and Kevin into the back of one of the cars. A driver and one of the younger Guardians piled into the front seats, and there was a slamming of doors all round. Kevin glanced through the window in time to see Bret and Sergeant Graves scrambling into the other vehicle.

The doors were barely closed before both big cars shot forward, a spray of gravel pinging against the polished paintwork. They drove alarmingly quickly along the narrow and overgrown lane which led from the crossing in Kevin's own world. The drivers really picked up the pace once they reached the Great North Road: with headlights ablaze, the convoy of anonymous but vaguely official-looking vehicles subtly encouraged other motorists to pull into the slow lane at the earliest opportunity. 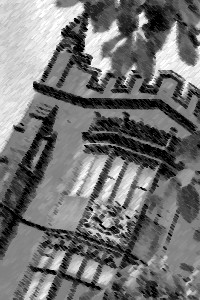 A short time later, they pulled off the main road and found their way to the University of Newcastle campus astonishingly quickly, it seemed to Kevin, following a route he did not recognise at all. The big cars swung into the kerb right in front of the NISSA building, both vehicles coming to a stop partially on the pavement itself. There were a few confused moments of car doors being opened and slammed shut, then Kevin found himself jogging up the familiar entrance steps following Bret and the Guardians, and just a few steps behind Tanji.

The group must have clearly announced their arrival by their heavy tread on the old stairs and in the corridor outside the administrative office. Nevertheless Sergeant Graves opened the door on a surprised-looking Sanjit and the squad moved inside in a fashion which Kevin - an inveterate reader of action novels and whodunits - would probably have described as military in nature, or at least the kind of manoeuvre practiced by police forces.

Apart from the administrative assistant at her desk - probably reading her emails, Kevin imagined - the office was empty and unthreatening. Bret strode over to the desk where Sanjit was sitting, followed closely by Kevin and Tanji, still hand-in-hand - Kevin felt that he did not want her to be more than a few inches away at any time.

Sanjit glanced from Bret to Kevin and back again with increasing alarm.

"Good morning," Kevin said politely, "Is Professor Braxton in yet?"

"Yes, she has just arrived," Sanjit replied nervously, clearly unsure of what exactly was going on, "Is she expecting you?"

"I don't think so," Kevin said, glancing at a silent and stoic Bret, "But perhaps she'll be good enough to see us at short notice?"

Just at that moment, Professor Braxton opened the inner door herself. The older woman took in the scene with one sweep of her eyes: the bulky old Sergeant who stood by the outer door with an air of apparent casualness, and the young people whose garb screamed "Guardian" to those in the know.

"Ah, Professor" he said, "We need to talk to you urgently."

Braxton stared hard at him for a long moment and then opened the door to its fullest extent.

Sergeant Graves moved quickly to stand by the window in the Professor’s office, a blocky silent figure with his hands behind his back. Kevin and Tanji took the seats indicated by the Professor, but Bret declined, preferring to pace the room, suddenly looking more agitated than Kevin had ever seen him before.

"We need to confirm something with you," Bret began, momentarily ceasing his pacing and looking directly at the Professor, "What did Wendy Rossiter tell you about the results of the research being done by Andrew Wollack?"

"Nothing. Or, rather, that there were no definitive results just yet," she replied, looking puzzled.

"But that's not quite true," Kevin interjected, "I've looked closely at Andrew's notebooks and computer files. It seems that he was on the verge of confirming a hypothesis - one with potentially far-reaching consequences, and certainly one that he should have discussed with his supervisor."

"And," Bret took over again, "We would have expected that his supervisor - as a responsible person - would have brought the matter to your attention."

"Well, Wendy definitely did not mention anything to me," Professor Braxton replied, looking distinctly put out, "I got the impression that Andrew had settled in for a long stint of research and that nothing would be publishable for a year or more."

Kevin was aware that the publication of research, in papers and journal reports, was the lifeblood of university departments. The general rule was not so much "publish and be damned" and "don't publish, and be sacked" - or at least not promoted. But he did also wonder in what publications papers on the world of Lyndesfarne would appear. Glancing at the rows of fusty leather-clad tomes that lined the Professor's office, he suspected that Braxton probably already had the full set of bound journals bound in hardback.

Tanji, who had clearly been following the exchanges, piped up, addressing Kevin.

"Why didn't you ask these questions when you before?" she wanted to know.

"Well, in all honesty," Kevin explained gently, "I was distracted - distraught, driven practically insane - by your disappearance, your kidnapping. So I wan't thinking straight. Sorry."

"So what is this vital discovery?" the Professor burst out, "This supposedly critical insight from Doctor Wollack?"

Kevin looked to Bret for guidance.

"Hmm," the other man replied after a few moments, "I don't think I'm prepared to tell you. Although it might be vital to the future of the crossing - perhaps even the end to all contact between the Two Worlds."

The Professor looked shocked at, Kevin assumed, the suggestion that the crossing might have to be closed. He added sourly in the privacy of his own mind that she would probably be out of a job if that were to happen.

"So we'd better talk to Rossiter directly, if that's OK with you?" Bret continued.

"But didn't you know?" the Professor said, again looking slightly surprised, "She's not here. She asked for urgent leave to attend a family matter of some kind."

Bret stopped dead, glanced at Kevin, then walked up to Professor Braxton's desk and leant forward over it.

"Did she say what, or where?" he demanded.

"Well, no," the Professor replied, sitting back in her chair, "I didn't think to enquire."

"Why not?" Bret pressed.

"I didn't think it was important," she reiterated, "Wendy explained it was urgent, a one-off. She's not in the habit of abandoning her post on a whim, so I assumed it must have been extremely serious and I simply let her go." Professor Braxton paused in thought.

"Although," she added slowly, "She did take a break at short notice, for a week or more, a year or so ago."

"When was this?" Kevin asked.

"I'm not sure. Sometime last summer, I think."

It might be just coincidence, Kevin thought, but that would coincide with his discovery of attempts to prevent the completion of the New Bridge.

"So, when did Rossiter leave?" Bret demanded.

"It was almost immediately after you were here the last time," the Profesor replied, nodding in Kevin's direction. She seemed genuinely unaware of the coincidence until now, Kevin considered, probably just the oversight of a busy professional with many things on her mind.

"And you're sure you don't know where she's gone?" Bret pressed.

"I've really no idea. But, she did seem rather distracted," the Professor replied, suddenly sounding tired, "She muttered something about visiting her family - that's her father's family, in the Other World."

Bret froze and then reached for his mobile phone, but the taciturn old Sergeant was already ahead of him. He was already speaking into some modern communication device - probably, Kevin thought, some sort of two-way radio with a direct connection to the guard post at the crossing.

"She's definitely crossed over," Sergeant Graves reported after a couple of minutes of terse enquiries and impatient waiting, while Kevin and the Professor looked on.

Bret nodded grimly at the news.

"We'll have to back to the Other World," he said.

Kevin shook his head in disgust and frustration. He reflected that it seemed that he had crossed between the Two Worlds more times in the last few days than he had done during the entire construction of the New Bridge.