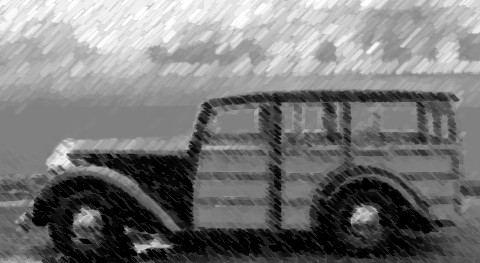 One aspect of the Guardian's responsibilities that was drummed into Tom and Alistair very early was the approach to dealing with unexpected visitors. Tourists occasionally turned up, even in these post-War days, usually walking or on bicycles, or occasionally being transported by cars or motorbikes. The Guardians' first task was to find out if the visitors already knew exactly what they would find - to discover if the travellers already knew the secret of the crossing to Lyndesfarne.

If not, their briefings has made it clear that they should gently discourage the travellers from going any further, by pointing that this was a small island, with little to see and nowhere to stay. The script the trainee Guardians had been taught stressed the dangerous (even fatal) tides and currents, that the island could be cut off, and that people had been washed off the causeway by waves. The causeway and bridge were supposed to be unstable, and unsuitable for motorised transport.

All of this was of course a complete fabrication, but was effective surprisingly often, especially when they pointed out that the dangers were so great that the watchmen were permanently posted here. The signs and warnings on the entrance to the causeway itself certainly helped, as did the metal and concrete barriers which appeared partially to block the causeway entrance, leaving an opening just wide enough to permit horse-drawn traffic.

The Guardians needed to be careful that some stranger did not slip through without the informal and friendly chat that protocol demanded. On quiet days, this was easy enough to do, but could be rather more difficult when there was much traffic on the causeway and bridge. Even so, they were under instructions never ultimately to prevent anyone from crossing. If someone ignored all of the warnings given, then they must let them cross over. There seemed to be an unspoken suggestion that there was some other way of dealing with any problems that might arise, although Tom had no idea what that might be.

In these circumstances, it was usual to pass a message to the Guardians at the other end of the causeway, although it took quite some time for Tom to understand how such messages were passed. Similarly, the Guardians on the England side did occasionally get early warnings from their counterparts on the Lyndesfarne side that a person was crossing who was apparently not familiar with the world they were entering.

Again, Tom's class at Cliviger Grange had been carefully briefed on how to deal with stray visitors from the Other World. As always, they were to be unfailingly polite and friendly. People who arrived from Lyndesfarne were often confused and disoriented, and a widely-used technique was to gently suggest that the visitor looked unwell and should perhaps return to the "Mainland" and seek medical advice. All this was conducted in the Lyndesfarne language, of course.

It was clear that they should never ultimately prevent, merely discourage, a traveller from continuing, unless there were clear signs of malicious intent or smuggling. To prevent the latter, it was also necessary to intercept every traveller, to ensure those who were supposed to cross did in fact adhere to the rules. There was no customs duty, but there was a lengthy list of proscribed goods.

Tom and the others had been briefed about the import/export aspects, and were expected to be always on the lookout for forbidden cargo. All goods had to be specifically approved by the Board of Control. There was a system of licences and bills-of-lading used by the wagoners, and it was always a useful opening gambit to ask to check the paperwork.

Animals and plants not also native to the Other World were prohibited, and Tom now understood that this included the dragons and Nightwings he had heard about on his first visit to Lyndesfarne. More surprisingly, eggs of any kind were wholly banned, even from England to Lyndesfarne, which forced Tom to conclude that some kinds of birds which were commonplace in his own world did not exist in the Other World.

It was also against the rules to import magical items into his home world although, informally, this was regarded as not so very important since the effectiveness would be removed by the special properties of the barrier between the worlds. There were a few rather curious exceptions to these rules, so that certain classes of potions and charms could be exported, although it was unclear whether these really retained their efficacy on the England side of the crossing. Conversely, the import of mechanical or engineering items ware carefully regulated, and only a very few simple machines could be taken across to Lyndesfarne.

In spite of the amount of traffic crossing between the two worlds, there were still periods when there was nobody about. During these interludes, Fred entertained Tom with tales of his experiences. One story that stuck in Tom's memory concerned a certain drunken carter. It seemed that there was an old wagoner, who lived in Lyndesfarne but often stayed late on the England side, and drank his dinner in one or another of the numerous public houses in the villages in the area. Then, three sheets to the wind, he would try and return to Lyndesfarne. Fortunately, his old horse knew the way home, and the old sot could frequently be found singing loudly in several languages as he crossed the causeway or, later on, snoring nearly as loudly while the horse patiently plodded on. 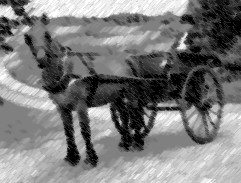 Eventually, it seemed that his horse got too old to work, and was put out to pasture. The carter managed to procure a new horse, a fine strong animal with a certain amount of spirit which needed to be kept in check. For the first few weeks, the old man was careful to avoid falling asleep on his way home, and appeared to be making some attempt to training the new horse to find its way around. Of course, the inevitable happened eventually: the drunkard consumed too much ale, got pissed as a newt, fell asleep on the way home, and the new horse found its way to its previous owners. The old man thus had the unpleasant experience of waking up in a strange stable yard, many miles from his home, in the middle of the night.

Fred told this tale with a certain amount of relish, and Tom found himself laughing along with the story. Even so, it was clear to Tom that dealing with occasional drunks was another aspect of the everyday responsibilities of the Guardians.

As the winter drew on, Tom found himself spending more and more time on active duty at the causeway. The weather became worse and worse, with ice and snow on the bridge, and storms and high winds driving the waves crashing over the causeway. The heavy weather made it seem barely light even in the middle of the day, as well as making it much more dangerous to cross between the worlds.

One stormy afternoon, already nearly dark, and with the waves lashing at the ancient stonework, Tom was astonished to see a lone traveller emerging from the gloom. There had been no other traffic on the bridge for some hours, the wagoners having sensibly decided that it was far too hazardous to cross.

"Who's that?" he enquired of Fred, who was once again acting as a kind of mentor.

Further questions and answers allowed Tom to discover a little more. The Official Messengers were part of those paired organisations, the Guild of Directions and the Travellers Guidance Group. They were specifically charged with the delivery of letters, written on paper and sealed with wax, which was regarded as the only reliable and secure way of getting communications between the two worlds. The services of the Messengers were used by the higher echelons of the various organisations that made up the governance of the crossing for communications that absolutely must not be delayed or intercepted.

The Messengers dressed in different ways, often rather nondescript, but usually included a cloak and a knapsack of some kind. Nevertheless, they were always recognisable to the trained eye, mainly because of the trademark staff, a full-size walking stick with an intricate carving in the handle. Messengers could commandeer transport, such as a car and driver, from the Guardian base at the point where the causeway met the coast.

Fred made it clear to Tom that, as a group, the Messengers were considered remote and standoff-ish. He also said that the Guardians had been specifically instructed not to interfere with the passage of a Messenger, and indeed to do everything in their power to prevent others from delaying their movements.

"They have carte blanche," Fred explained, with a slight note of irritation in his voice, "They can do whatever they have to in order to get their messages through."