Tom dreamt of his parents. It was a strange dream, lucid and clear, with none of the twisted surrealism and random jumps of location of the other dreams he had experienced - almost as if it was a real memory which had somehow been suppressed until now.

He had never really known his mother and father. His Granny had told him that they disappeared under mysterious circumstances when he was very young and, until now, he had no clear recollection of how they looked or sounded. In his childish way, he had imagined endless ways in which his parents were involved in some exciting adventure, and how they would return to him in a glorious triumph some day.

Even so, he was convinced that the man and woman who appeared in the vision were indeed his parents, at a time when he himself was still a boy - perhaps eight or nine years old, judging by their relative heights. They called each other Lizzie and Brad - names he knew from Granny. The old lady herself also featured in the dream, and Lizzie called her "Ma" just as he had somehow expected.

The two of them arrived at the front door in the middle of a rainstorm. Granny was evidently hugely surprised to see them, but obviously delighted, too, and ushered them inside immediately.

His mother was dressed as he had always imagined her - a floral summer dress which reached to her ankles, under which stout sensible shoes could just be glimpsed. His father wore trousers of soft leather - he would later distinctly remember feeling them when he was hugging his Dad - and a flamboyant brightly-coloured shirt of canary-yellow. Both wore long capes over their shoulders, each with a hood to keep off the worst of the weather. Brad swung off his cloak adroitly once inside, shaking off the rainwater and hung it on the peg just inside the door before helping his wife with hers.

In the dream, Tom had no hesitation in embracing both mother and father. Ma held close for long moments and, when he was finally released, he was immediately swung up in the air by his father. In his vision, he was laughing and crying, and calling out, again and again, "Ma and Dad, home at last!"

He distinctly remembered seeing Granny looking at the three of them with tears in her eyes.

Brad and Lizzie were offered tea by Granny, which they immediately accepted. They were ushered into the front room with young Tom while Granny bustled off to put the kettle on. As they settled, Lizzie asked her son a seemingly endless series of questions - what he liked to eat, how he was doing at school, what games he liked to play - all questions, it seemed to the adult Tom, that a less-absent mother would know without asking. After what seemed like ages to a child, Granny entered the room carrying a tray of tea things, and the relentless questions ceased abruptly.

Tom always had been a quiet child. Around adults, he tended to sit and listen, and had already found that he learned more - and understood more - than perhaps the adults realised, even at a relatively young age. His mother seemed to want to hold him close and never let him go, although Tom knew with the clarity of his dreaming vision that she would be leaving all too soon. His childish self sat between his parents on the old sofa in the parlour at Granny's while the grown-ups talked. They seemed to almost forget about him - perhaps they just thought him to be asleep.

The adults sipped their tea and talked about what had been going on.

"We really should apologise to you, Ma'am," Brad began.

"We so very sorry, Ma," Lizzie continued, "I'm sure you've been worried sick about us. I can see you've been doing a wonderful job with young Thomas here - I feel so sad, so guilty at having to leave him here with you."

"So what's really going on, then?" Granny asked, rather sharply, it seemed to Tom.

"We're in real danger, Ma," Lizzie replied, looking directly into her mother's eyes, "We're in hiding, in fear of our lives."

The older woman sat back in apparent shock. Then, recovering somewhat, she demanded to know from whom they were concealing themselves.

"I can't tell you, Ma. It's all to do with Brad's work, and his family. We've found out a secret, an important secret, and now an enemy is out for revenge. There's a long history behind all this, but if I were to tell you it would only put you in danger too."

"It's all my fault, I'm afraid," Brad said, sighing. "I made a mistake - I got too close to someone dangerous. But there's nothing I can do about the situation right now."

He shrugged his shoulders apologetically, then continued.

"We should not really be here at all, but we had to warn you. We can't risk taking Thomas with us, although I'd really like to. We will have to keep moving, hiding, and that's no life for a child. So, we need you to keep your eye on Thomas. Don't tell him about all this - the less he knows, the less chance there is he can let on accidentally. And, you need to look out for strangers in the area."

Brad and his wife exchanged glances for a moment, then he continued.

"There's one other person we think you can trust - George Wilson."

There was a pause for a moment, before Granny responded.

"Oily George? The mechanic? From down the street? The one who's been looking out for Thomas sometimes?"

"Yes, that's him," Brad replied, "If you get worried, or suspicious, talk to George. He doesn't know much, but he will be able to get a message to us - or at least to someone who can help. And don't hesitate or delay - if there's anything worrying you, we'll be able to help more if you let us know in good time."

The message seemed to be getting through to Granny - that this was a fleeting visit, one that might not be repeated.

"When will we see you again?" she asked, pensively.

"I don't know - we're not sure when it would be safe. I can't let people follow me here and threaten Thomas. It's not secure for any of us."

There was another pause. It seemed to Tom that all of the grown-ups were struggling with what to say.

"We will be able to send you money, for Thomas, from time to time," Lizzie said, ruffling Tom's hair fondly. Brad nodded in agreement.

"I'll make sure of it," he said, "Through my contacts. The money will arrive in the post from time to time, as much as we can afford. There won't be any way of tracing the mail, but try not to spend it too obviously, please. Just use it to give Thomas the best you can."

Granny leaned forward, taking her daughter's hands in her own, and said with tears once again welling in her eyes, "You can rely on me, Lizzie. Now go, and look out for yourselves. Thomas will be fine here with me." 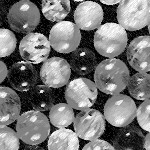 The end of the dream was perhaps the strangest part of all. His father drew something from his pocket. It looked like some kind of glass globe, a little larger than even the biggest of the glass marbles Tom played with, and seemed to glow slightly from within.

"Hold out your hand, Thomas. This is for you."

"It's a present, of sorts. Don't worry about it, son," his father had responded, "Just do as you're told. There's a good boy."

Brad placed the marble on Tom's palm and then laid a hand on his forehead. His father then made a rapid series of gestures in the air, too fast for Tom to follow. The marble seemed to soften in his hand and melt into his palm, and he dreamed nothing more.