Alistair seemed delighted to be arriving at Bram's family house, putting Tom in mind of a puppy eager to please.

Their boots crunched over the gravel as they entered the gate and looked around. The flower-beds and kitchen garden looked well-watered, Tom thought, despite the warm weather and recent lack of rain. The grass had recently been mowed, and the hedging recently trimmed. All-in-all, he mused, a fair amount of work had been expended in maintenance of house and grounds, his experiences of farm labour last year having taught him just how much effort was involved.

At that moment, Yise appeared from the stable block, dressed in riding clothes and leading a well-groomed horse. Seeing the two young men arriving, she called out and waved vigorously to attract their attention. They strolled briskly over to her.

Bram's sister was clearly very pleased to see them, Alistair in particular. She embraced him warmly, followed by a kiss on the cheek, standing on the tips of her toes to reach her target area. Alistair reddened noticeably. It was obvious to Tom from the way that she looked at him that this was rather more than a mere acquaintanceship.

"Wonderful to see you again, Al," she said, her eyes gleaming.

Alistair took both her hands in his own and they looked into each other's eyes for a long moment.

"You remember my friend Tom, don't you?" he said eventually, pulling away from her slightly, and then putting his arm around her waist in a distinctly proprietary fashion.

"Yes, of course," she replied, smiling rather more shyly at Tom.

The horse, which had been waiting patently during all this, chose this moment to nuzzle Yise. She broke away, giggling.

"Bram and my father are waiting for you inside," she said, "I need to exercise my horse. Now you boys run along, and I'll see you at lunch."

Looking directly as Alistair, Yise then added a phrase in the Lyndesfarne language which Tom took a few moments to understand. When he did, he reddened - it was an idiomatic phrase, an endearment with an undertone of slightly predatory and distinctly sexual intent. He supposed that, since they had been speaking only English, Yise had assumed that Tom's understanding of the other language was limited.

The young woman swung herself expertly into the saddle, her riding clock billowing out as she did so. The horse skipped sideways, eager to be off. She settled herself quickly and nudged the beast to a fast walk, turning to wave briefly at the two men.

Tom turned to Alistair, who was still watching Yise's retreating form riding the horse towards the gates where a second mounted figure had appeared. The rider wore the not-quite-uniform of a Lyndesfarne Guardian, and appeared to be waiting to escort Yise on her morning canter.

"You've been visiting here without me," Tom said in a tone of mock admonishment.

Alistair grinned in an embarrassed manner.

"No wonder you knew the way so well. And you didn't mention it in your letters."

"Well, it was not the kind of thing I was very comfortable writing about. Besides, I wasn't sure until recently how serious she was."

"If you ask me," Tom smirked, thumping his friend playfully on the shoulder, "You've got nothing to worry about." 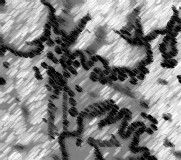 Guided by Alistair, the two men made their way into the house. They found Bram and his father sitting in the comfortable room that Briz seemed to use as an office, or perhaps a study. The two men sat either side of the large table, which was illuminated by several of the magical lanterns commonplace in Lyndesfarne.

They were poring, heads together, over a large sheet of paper which, as he drew closer, he could see was a map of the area. As they watched, Briz stabbed a forefinger on a location before making a spreading movement with his fingers, a gesture Tom knew meant "make larger" or, perhaps, "expand". Obediently, the image on the map rippled and redrew itself to show an enlarged representation of the area he had just pointed at.

At the sound of Tom's boots scuffing the stone flags, Briz and Bram looked up, only just registering the presence of the newcomers. Both father and son looked tired and careworn, very much less upbeat and carefree than their normal ironic selves, and Bram looked even more burdened and exhausted than any time Tom had seen him in the Army, even under the most extreme of battlefield circumstances.

Briz beckoned them in.

"You made it then," Bram said, wearily, "Come and sit down."

He stood up and grasped each of them warmly by the hand, drawing them into the room. The two young men made themselves comfortable in chairs by the unlit fireplace. Almost as an afterthought, Bram made another casual gesture at the magic map, causing it to roll itself neatly at one end of the table.

"Let me get you some refreshments," he suggested as he made to step out of the room, nearly collided with Yellez coming the other way.

Tom and Alistair moved to stand up politely, but she waved them down again, smiling.

"I was just going to make some chocolate," Bram said to his mother.

"Oh, I can do that," she replied cheerfully, "You boys sit and catch up with your news."

Tom and Alistair spent quite some time reprising much of the news they have already communicated in their letters. Yellez soon returned with the hot chocolate, handing it out in silence as Alistair talked about his assignment to the Guides.

Soon it was Tom's turn. Briz, in particular, seemed very interested to hear at first-hand some of Tom's experiences. Both he and Bram listened carefully as Tom told them about the motorcycle attack and what he had learned of the subsequent investigations.

As Tom brought his retelling to a close, Alistair stood up unexpectedly.

"I need to step outside for a few moments," he said quickly, "Don't wait for me. Tom's already told me about the dragons, so I won't miss anything."

Briz said nothing, but nodded his head gently with a characteristically wry smile playing about his lips. 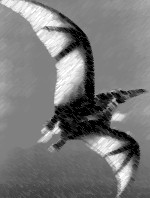 After Alistair had left the room, Tom repeated the tale of his chance meeting with Old Ged and the subsequent - thwarted - attempt to entice a flight of dragons across the causeway. Again, Briz listened closely, occasionally interrupting with questions and clarifications of his own. Bram sat quietly throughout, apparently following the story, but not

"It was a very clever plan," Briz said when he had finished, "Dragons are terrified of water, even when they are flying. They never fly very high, anyway - they like to smell the landscape below them, as well as see it. I've heard of them panicking at the sight of a not-very-wide river. The smell of the pigs must have driven them to the point of insanity, especially since they were probably starving."

At that moment, Yise appeared in the doorway of her father's study followed, a few seconds later, by Alistair.

"I'm back," she said, looking flushed and excited. Tom was not sure whether this was as a result of an exhilarating ride on horseback, or whether there was some other reason.

Briz looked from his daughter to Alistair and back again.

"I take it you've already caught up with Yise?" he said to Alistair.

"Yes, sir," he replied promptly, "She was just going out riding as we arrived."

"And now she's back, evidently in one piece, and with nothing to report, I take it?"

Yise shook her head slowly. Bram appeared to be hiding a smirk behind his hand.

"Which means that it must be nearly lunchtime."

Briz stood up slowly and stretched his back.

"Oh, there must be just time to walk the gardens, I think," Yise said archly, turning her head to look sideways at Alistair. The young man reddened perceptibly.

Alistair and Yise walked together around the pathways, trailed by the other two men. Tom was beginning to feel just a little like a gooseberry.

"Do you think those two are..." Tom hesitated, unsure how to continue.

"Almost certainly," Bram replied cheerfully, glancing at the other man, "Don't worry - Yise certainly knows her own mind, and there's nothing that you or I - or even my parents - could have said or done which would have changed anything."

"Well, they certainly look well together," Tom continued, watching the young woman pointing out herbs and bushes to Alistair, never moving more than a few inches away from him at any time.

A bell rang out from the house behind them. Yise and Alistair affected not to have heard the sound.

"Time to go in," Bram said, raising his voice, "Lunchtime!"

Lunch was served in the kitchen, around the huge wooden table which filled the centre of the room. It was a rather more subdued affair than on the previous occasion Tom had lunched there, even though Yellez and her sister-in-law produced another fine example of farmhouse cooking.

He glanced around the table. Briz's sister-in-law, who Tom eventually remembered was called Preda, seemed even more morose and depressed than on their last visit. She sat with her shoulders hunched, picking at her food and answering in monosyllables when spoken to. Her children also seemed to have caught the same mood, sitting quietly and showing none of the lively sparkiness that they had shown on Tom previous visit.

Taking advantage of a lull in their discussions, Tom interrupted Bram to ask quietly about Preda.

"Her husband Hamet has disappeared," Bram replied equally quietly, "No-one seems to know where he has gone. We're not sure whether he has been abducted or gone off for obscure reasons of his own."

"What does Preda think?" Tom rejoined.

Bram explained that Yellez has questioned Hamet's wife closely. She had been told that he had been distracted for some time. Preda felt sure that something unusual was going on, but he had not told her anything.

"Usually, Hamet never stands up to his wife," Bram continued, "Completely henpecked, really. But unusually, on this occasion, the more she pestered and nagged, the more determined he seemed to be to tell her nothing, and to push her away."