Bridge of Stone and Magic: Chapter 4

During the design of the New Bridge to Lyndesfarne, Kevin and Bret had spent quite some time exploring various possibilities for the final link, the section of the bridge which spanned the transition between the worlds.

At the time, Kevin had considered the use of a conventional stone arch to join the two sections of the New Bridge that he and Bret had been devising. The construction would have used a semi-circular arch of traditional materials: old-fashioned cut stone blocks and a cement mortar. With the benefit of 20-20 hindsight, he knew that this particular idea would always have been a non-starter, since there would be too much movement in the sections of the bridge. Modern design and materials meant that the individual halves were expected to move slightly, literally to sway in the wind, and even this tiny movement would have caused the stonework to crack after a few years, with the risk of catastrophic failure in extreme storms.

Aware of the problem, Kevin certainly did not want the New Bridge to collapse in a storm, and he spent an inordinate amount of time exploring ways in which the inherent problems of using a "pile of rocks" - his favourite term for old-fashioned masonry construction - could be avoided. He investigated the mechanical properties of the locally-quarried stone in some detail. He thought about using alternative adhesives to mortar that blocks together. He even considered ways in which the joining arch could be reinforced with both steel beams (which could not be relied upon on the Lyndesfarne side of the crossing) and magical sprites (which would not work in his world), like a miniature version of the Old Bridge itself.

Eventually, Kevin abandoned the masonry arch approach altogether. Nevertheless, he had been curious, in a low-key professional kind of way, about the stone that was used for the construction of the Old Bridge, and it was therefore unsurprising that he should find himself in a quarry in his own world, not far from the crossing where the New Bridge was to be constructed.

This was in the early days of Kevin's introduction to the world of Lyndesfarne, and before he had really appreciated very much of the strangeness and sophistication of the Other World. He had only recently been introduced to Bret and had had not yet appreciated his remarkable shapeshifting abilities - his ability to appear male when he (or should it be she?) wanted. Indeed, this was long before he had met Tanji, and he was still being guided everywhere in the world of Lyndesfarne by old frog-face Ricard, his previous Guide from the Guild of Directions.

Given the intense interest in traditional masonry, perhaps it was not surprising that Kevin was keen to understand more about the process of construction and the materials that would be used. After one of their regular working sessions, when he and Bret were trying to pull the complete design of the New Bridge together, Kevin broached the question of a visit to a local quarry in what Kevin was at that time still thinking of as the Mainland - meaning his own world.

Bret looked thoughtful for a moment.

"I think that could be easily arranged," he replied, "I'll make some enquiries."

Early the following week Kevin received a message on his answering machine from Bret, asking him to meet in the car park by the causeway at eleven o'clock the following morning. The message concluded with a recommendation that he bring a stout pair of boots and a waterproof coat. Kevin never travelled to the Lyndesfarne crossing area without such equipment. From personal experience, he knew that the weather was often inclement and sometimes violently changeable, and in any case he always seemed to end up walking everywhere.

Bret was waiting for him when Kevin arrived, standing quietly in the cover of the nearly deserted car park wearing the long hooded cape that was even now so very popular in the other world.

"Ready for a walk?" Bret asked laconically as Kevin dragged his coat and rucksack out of the boot of the Volvo.

"Sure," Kevin confirmed, locking the car, "Which way do we go?"

Bret pointed across the car park away from the direction of the old causeway where a narrow gate in the low dry-stone wall appeared to lead to a farmer's field. It was a direction that Kevin had never explored before, and indeed one which he would never have even considered. Nevertheless, he walked with Bret to the gate, from where he could see the faint marks of a path that led across the field.

"That's our route," Bret explained as he eased open the gate, "About an hour's walk."

They followed the footpath across several fields and over a low rise, Bret setting a fast pace that Kevin found he was just capable of keeping up with. They clambered over several gates, some of modern tubular galvanised steel, others of a traditional wooden construction in various states of disrepair. The path joined a wider track obviously more heavily travelled, mostly by heavy farm machinery. Their route passed cultivated fields on one side, and an area of rough ground dotted with gorse and bracken on the other.

They skirted a heavily wooded area making their way steadily uphill, then stopped to catch their breath at a point where the edge of the woodlands curved away from the path. Their wind-swept vantage-point gave them a view out over the coast. Kevin could make out the causeway stretching out across the tidal sandbanks and merging into the bulwarks of the Old Bridge. The three arches of the bridge were plainly visible, but the causeway on the other side disappeared almost immediately into the perpetual haze that occluded the crossing almost all the time.

The far coast of what Kevin still thought of as the Island could barely be made out, and it was impossible to discern any details. Kevin was left, as always, with the impression of a barren and windswept island, devoid of trees or human habitation. The truth of the matter, of course, was obscured by the mist: the Island was just the visible edge of an entire world, a world of wonders and magic, the world that he knew as Lyndesfarne. 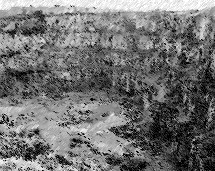 Another twenty minutes walking brought the two men to the abandoned quarry itself. Kevin stopped to look around as the track levelled out into what was, at some time in the past, the cutting and finishing area. Ahead of him, and curving around both to left and right, was a cliff face, perhaps fifty feet high, cracked and very broken, and now very mossy and green.

Kevin knew quite a lot about how large blocks of stone were cut and finished in olden times. He had gained a basic understanding from his University education, and had subsequently undertaken a fair amount of research on the subject when the possibility of a masonry arch had been first mooted.

Even so, it was difficult to imagine, for one who had been brought up in an age of powered machinery, how all this work had been undertaken. It had required a vast amount of skilled and intensive labour, and utilized a number of techniques which were all but forgotten today.

Huge blocks had been cut from the quarry face using a combination of two approaches. Firstly, holes were drilled with great labour into the face of the rock to undermine the cliff and allow a block to be separated. From above, the resulting cracks were opened further by hammering in dry wooden wedges which were then dampened so that they expanded slightly, but with considerable force, eventually enough to separate the stone block from the face of the quarry.

To Kevin's moderately expert eye, the tell-tale signs and marks made by cutting rocks by hand were visible everywhere, as were the signs of transportation. There were holes in the slope leading up the the quarry made to assist in the process of removing whole blocks from the quarry face. Stout poles would have been inserted into these holes, which would have been used as belays for ropes and pulleys that allowed large blocks to be slid down to a level where they could be worked or transported using, in fact, the slope up which he and Bret had just hiked. 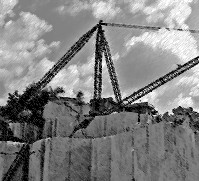 All about were the tell-tale irregular mounds of spoil heaps, where chips and off-cuts, and larger blocks which had split or cracked while they were being worked, had been discarded. These piles were now covered in undergrowth and turf, virtually unnoticeable unless one knew what one was looking for.

The cut and shaped blocks would have been lifted using block and tackle, and a derrick of heavy timbers - all long since removed or rotted away, of course - and loaded onto carts drawn by teams of oxen, or perhaps donkeys for smaller loads. These loads were then hauled along the rough track that he and Bret had walked to get here.

"It should be possible to get powered machinery in here," Kevin mused aloud, staring at the access route.

"What's that?" Bret said, spinning around suddenly, seeming to be unusually startled by the other man's mutterings.

Kevin explained that the track would have to be widened and a proper surface constructed to allow the passage of heavy lorries and the like. Bret nodded his agreement, apparently mollified by the explanation. Kevin spent a further hour or so poking about in the quarry watched, for the most part, by Bret with an amused expression on his face.

"Fair enough," Bret responded, shouldering his rucksack ready for the march back.

Kevin walked back along the track, following Bret in companionable silence and thinking about the implications of a masonry arch for the final section of the bridge. He would realise it only much later - when he knew a great deal more about the properties of magic - but he had noticed signs that magical processes had been used to cut and form the blocks of stone.

When he thought about it - in a reflective mood in the quietness of his little flat in South Manchester and long after the New Bridge had been completed - he could identify all sorts of incongruities. He had noted various anomalies, some oddities in the markings on the rock faces and on the worn and slippery ground surface upon which they had been standing. In particular, there were astonishingly straight cuts in the quarry face, the kind of thing that would be difficult to achieve even with modern powered machinery, let alone the hand tools that would have been available at the time the causeway and the Old Bridge had been constructed.

So, Kevin mused, magic was still possible in this world at the time the Old Bridge, or at least the causeway leading to it, was under construction. So exactly when did the barrier between the worlds, the artefact that prevented magic from working in this world and disabled technology in the other, come into existence? All the evidence suggested that it was about the same time as the completion of the Old Bridge, rather than much earlier as he had previously been led to believe.