Bridge of Stone and Magic: Chapter 21

Kevin would later remember, looking back on this period, that the following few months were hectic in the extreme. He had been effectively co-opted onto a task force attempting to carry out the Ferryman's direction to identify that shadowy group that had been working for generations against the status quo. Under the executive command of the Ferryman, every available person seemed to have been drafted in to investigate even the most tenuous lead or to re-explore avenues which had not been considered in decades.

It was a period of intense and dedicated activity. Kevin found himself neglecting his everyday professional responsibilities and his consultancy work for days, even weeks at a time. The Board of Control, together with the other Boards and Guilds whose complex web of influence and governance had for so long infiltrated the crossing between the worlds, mobilised everyone they could identify. Agents of one description or another were sent all over the world, as far as Kevin could see - indeed, all over both worlds - inspecting the sites of crossings now closed and trying to follow up on clues about the mysterious organisation. He strongly suspected he did not even know about most of the investigations and enquiries that the Ferryman had instigated.

The investigations that Kevin was asked to undertake were all in his own world, presumably on the grounds that his familiarity would be an advantage. He was always accompanied by Tanji, which was of course exactly what he would have wished in any case. However, she had been fairly intensively briefed over several hours by Eosin and two others who were also engaged with the maintenance of the barrier magic. The discussion was held entire in the language of Lyndesfarne and was, Tanji explained later, extremely technical and included magical concepts and descriptions which defied reasonable translation.

However, she assured him that she felt sufficiently well equipped to be able to spot any tell-tale signs of magic leaking from the Other World through a crossing that was not quite closed, but remained in what Kevin understood to be some in-between state. She also said that Eosin had also taught her some esoteric magical technique which actually did work in Kevin's world, simply because no-one had thought to add an inhibitor to the Barrier between the worlds.

It was not unusual to encounter anonymous and often rather mysterious individuals when returning to brief the Ferryman on the findings of the most recent mission, and then to receive instruction on their next task. These meetings usually happened in the Ferryman's house and it seemed to Kevin that there must be people coming and going at all hours.

One person who Kevin was surprised to see was Kithyn, a woman who was an old school friend of Tanji's and who had been tricked into tracking her movements, and therefore Kevin, during the construction of the New Bridge. Although the motivation for the plotters Amiss and Ricard had apparently been one of personal gain, Kevin had more recently wondered how much of this interference was intended to delay or disrupt the completion of the project, especially since their discovery that Tweedledum - who had been in a position of considerable responsibility during the construction work - had secretly been an agent for the organisation opposing them.

Kithyn nodded rather stiffly to Tanji and Kevin, looking distinctly embarrassed, and moved to pass them in the corridor which led to the front door. Tanji was not going to let this happen, it seemed. She rushed over and took her erstwhile friend by the hand, effectively preventing her from leaving. The two women, one petite with her blonde hair in a ponytail, the other tall and big-boned with her dark hair cascading over her shoulders, spent many minutes in private conversation. Kevin could not hear what was being said, but from the body language the women displayed and the tears that were discreetly dried afterwards, it seemed the two women had managed to restore their long friendship.

Their first investigation Kevin and Tanji undertook together required a trip to Ireland. He already knew that, for some reason no-one had yet understood, this country had been a favourite spot for crossings between the Two Worlds. Perhaps it was some unimaginable quirk of the magic used to construct crossings, or it could have been the degree of remoteness and isolation implicit in a small island on the edge of a continent, or even simply that the climate - mild and damp and windy - was favoured by the crossing-builders, perhaps because the blustery and unpredictable local weather tended to disguise any cross-world impact of a mismatch in current conditions.

This unexplained preference had earned the island a reputation for mystery and magic, and engendered any number of myths and legends about strange peoples and wonderful creatures that were still in circulation to this day. Personally, Kevin had no doubt that many of the stories of pixies and leprechauns and Faerie Folk were based on real experiences, stories which had grown in the telling while losing a degree of accuracy in the process. In any case, the last of the crossings to the Emerald Isle were supposedly closed more then five hundred years ago, so old wives' tales were unlikely to be a reliable guide.

So it was that Kevin found himself on an early morning flight from Manchester airport to Cork with Tanji at his side. It was a short and rather noisy flight on a small and propeller-driven aircraft that seemed more like a bus with wings tacked on as an afterthought. After the short and extremely relaxed immigration procedures, Kevin collected a worn-looking hire car which was apparently what had been reserved on their behalf, and certainly suited their cover story that he and Tanji were English tourists travelling on a tight budget.

Their itinerary took in several of the more remote spots in south and west Ireland, places both wild and beautiful, no doubt, featuring views across unspoilt forests and flat boglands to ranges of low mountains in the distance. Even so, Kevin realised that passage to these places would have been difficult without the benefits of modern transportation, and indeed potentially dangerous, given the possibility of getting lost in the mist and being sucked into a bog. 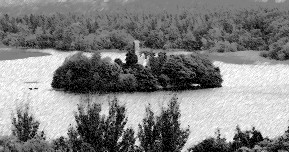 Their first destination was a secluded lake, the previous location of a crossing the closure of which had been the subject of one of Bret's innumerable tales. This location was one where Kevin did not really expect to find anything, since he had been given to understand that the crossing here had been closed quickly and explosively. Indeed, the lake in front of them was almost perfectly circular when seen from the air, and he knew that the current edges of the lake marked almost precisely the barrier between the Two Worlds, the hole in the ground resulting from the explosion becoming rapidly filled with rain and water from diverted streams.

Kevin stopped the car in several places as directed by Tanji, who continually referred both to a conventional detailed map of the area as well as a set of notes in her own handwriting which, although written in English, contained so much private and obscure shorthand that he found it completely impenetrable. At each place, they took a short walk, or sometimes a much longer one, the longest of which was a forty-minute hike to a high vantage-point on the edge of a cliff that fell away to the lake waters below.

From their view-point, Kevin would hear the wind whispering across the lake surface, barely rippling the water. A light mist decorated the heather-covered hillsides and partially obscuring the blue-grey mountains in the distance, a cold damp mist that made him feel very glad of the warm and waterproof jacket he had remembered to bring, not to mention the stout hiking boots he had worn on the plane.

At each of the places they stopped, always close to the very shore of the lake, sometimes with the waters practically lapping at their toes, Tanji would clutch the pendant that Eosin had given her in her left hand, and essay a series of complex gestures with her right, her face creased with concentration. In each case, she would then shake her head and Kevin's unspoken question. There was, it seems, no magic now remaining around this long-closed crossing.