Kevin and Tanji joined the irregular line of people heading for the causeway. As he frequently did while making this crossing, Kevin thought about the border formalities with a degree of mild amusement. The official procedures were incredibly low-key, and consistent with the official attitude (at least in his world) that Lyndesfarne did not exist. There were no passports, no visas, nothing on paper at all. Still, it was clear that the crossing was thoroughly monitored, and those who crossed were watched with great care. 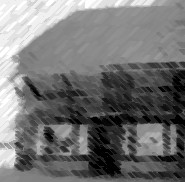 At the point where the road joined the causeway, there was a low building which Kevin had mistaken, on his first visit, for a Tourist Information office. This disguise was fairly convincingly carried off, both inside and out. The building sported numerous signs displaying the "little I in the box" logo, and inside were ranged racks containing maps and brochures advertising tourist attractions - all of which were located on the Mainland, Kevin had noted.

However, unlike most English tourist information offices, this one was both large and well-staffed. Through one glass door, several people could be seen sat at desks, watching screens or working at computers, and there were several other doors where the glass was opaque or just covered over with posters. There were always people sitting around, apparently waiting for service from the desk staff, or taking hot drinks from the coin-in-the-slot machine. After a few visits, Kevin had begun to realise that these same groups of people sat in this office day after day. They were in fact part of the security organisation which he had heard referred to as the Guardians.

Kevin nudged Tanji, and pointed in the direction of the tourist information office.

"I just need to change some money," he said, "Do you want to come in?"

"I will wait outside, if you don't mind," she replied.

"Suit yourself. I shouldn't be long."

Kevin ducked into the building and made his way to the discreet booth tucked away in a corner where it was possible to change English money into the Lyndesfarne currency. He had the usual tussle with the rather sour-faced old dear behind the counter, who would refuse to deal with you, or even comprehend what you were saying, until you made it quite clear that you knew about the Island, and that you really did understand what you were asking for.

Finally, he handed over a bundle of twenty-pound notes, and received in return a cloth bag which emitted a muffled clunk when he put in on the counter. It sounds just like, Kevin thought, a bag of rather cheaply-made spanners. 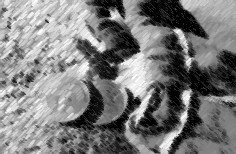 Lyndesfarne currency consisted of large thin disks of various sizes, apparently made of a rather dull metal and covered with fine engraving. On the Island, they were invested with a number of magical properties to prevent counterfeiting, as well as the ability for a person to press together many coins of the same denomination, so that a large amount of money had the same size and weight as a single disk.

Here, however, the coins were just inert lumps of inconveniently heavy metal. Kevin stowed them away in the top of his rucksack, on top of his notebook and change of clothes. There were no receipts or any kind of paper trail, which had worried him on his first visit, but his company had been unusually forgiving in the matter of chits for expenses claims.

Returning outside, Kevin saw Tanji talking to one of the causeway Guardians, who was wearing a blue windcheater covered by a tabard of that Day-Glo yellow material made familiar by workmen everywhere. Dodging a wagon, he rejoined Tanji just as the Guardian wandered off.

"What was all that about?" he asked.

"He was telling me about the Watchers. He said there seem to be more and more of them, and they don't know why. There are all sorts of rumours going around, that they have been frightening the construction workers on both sides, that they disapprove of the new bridge."

"But why?" exclaimed Kevin.

Kevin had himself seen the Watchers on many occasions, usually while he had been inspecting the New Bridge site. Silent figures in dark robes would emerge from the mist, at a distance too far to make out any features, and often standing on difficult-to-access parts of the surrounding mudflats. The figures would stand motionless for a few minutes, apparently studying the building work, and then disappear as swiftly and silently as they had arrived. In his more paranoid moments, Kevin thought that they were watching him personally, although he considered it more likely that they were interested in the construction of the New Bridge itself.

They walked on along the causeway, passing the signs that seemed expressly designed to attempt to scare off the casual traveller. These announced in large letters: "Dangerous causeway, cross at your own risk", "Extreme caution advised during adverse weather conditions" and "No motorised transport beyond this point". Kevin wondered whether it really was that hazardous. After all, some people clearly made the crossing regularly, and Kevin had heard that some travellers lived alternately on either side of the straights. If people apparently disappeared, he reasoned, it was simply because they elected to say on the Island. 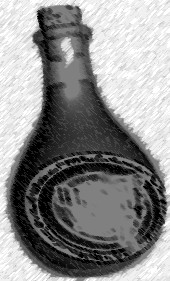 They walked on, keeping an eye out for foot traffic, and avoiding the heavily-laden horse-drawn wagons coming in the opposite direction. Looking at the passing traffic, Kevin voiced a question that had been nagging at him for some time - and indeed one where he had already made a few discrete enquiries.

"What's on those wagons? I mean, what's being imported to my homeland?"

"Well," replied Tanji, "Some rare things, a very few magical artefacts are thought to work in your world. Or at least some people require to buy them."

More questions and answers allowed Kevin to put some flesh on this statement, although he had heard the tale recounted before. It seemed that certain items were thought to be effective on the Mainland. Generally, the more abstract, philosophical or psychological the supposed effect, the more chance it had of being sold. Examples included good-luck charms, health improving talismans and, Kevin was not entirely surprised to discover, potions to enhance sexual abilities and prowess.

Tanji's face had coloured up while explaining this last point. Kevin did his best to be charming, to avoid embarrassment for Tanji and himself. This seemed to work, as her blush was soon replaced by a tight smile.

They walked on in companionable silence, while Kevin thought over what he had just been told. He was extremely unconvinced by the explanation on exported goods. Building a new bridge, with all the difficulties, effort and cost, he thought, just to import a few spells of dubious effectiveness. After all, the supposed effects of these so-called charms could be a complete fraud, just something to convince the dangerously gullible.

So, why was the old bridge built? There must have been a considerable imperative to make that kind of investment. He could not imagine that the curios, trinkets and artefacts of doubtful magical abilities would represent more than a tiny percentage of the total volume he knew to be transported over the bridge every day. I don't believe a word of it, Kevin mused, there is quite definitely something more going on here than meets the eye.

There was a steady stream of people crossing the bridge in both directions. Kevin took to people-watching as they walked. After a fair bit of practice over the last couple of years, he thought he had become quite adept at spotting those originating in Lyndesfarne.

Of course, Islander appearance was highly variable, just like on the Mainland: people came in all shapes, sizes and colours. Even so, there was a certain tendency towards weathered or ruddy-faced features, as if they had been spending a lot of time outdoors. Or perhaps too much alcohol, thought Kevin with probably unnecessary cynicism.

The common aspect, though, was what could only be described as a certain elfin appearance, even for tall or well-built individuals. Both men and women tended to have rather sharp features, high cheekbones and at least the suggestion of pointed earlobes.

Clothing was a dead giveaway, too. Kevin's background and upbringing meant that his sense of dress or fashion was strictly blinkered, but even he could see that Islander clothing was varied, complex and sophisticated. There was more use of bright and primary colours, as well as rarely-seen shades such as chocolate brown. Black was seldom worn. Flowing robes were popular for both men and women. Trousers were less often seen, but again worn by both genders. Clothes seem to be made without any kind of stitching or seams, Kevin had noted, and presumably some kind of magical processing and fastening was involved.

On this occasion, Tanji was dressed in a variation of the clothes many Islanders preferred to wear for travelling: belted leather trousers in dark brown, short boots and a long brown cape over a silk aquamarine blouse. Kevin had seen these capes before; they were wonderfully warm and waterproof, and much better that the Mainland hi-tech anorak he had worn on his first visit.