Motorised or magical transport on the causeway and bridge was rigorously, if discretely, discouraged by the Guardians on either side, but every now and then something slipped through. Even as Kevin watched, a wagon of suspiciously lightweight design heading towards the Island grated to a halt just after the apex of the central arch. All four wheels had suddenly jammed with a screech of iron tyres on stone. Groans and curses from the carters on either side could be heard over the wind, even from this distance.

"What an idiot!" muttered Kevin to himself, "He's probably using wheel bearings salvaged from a car."

Simply put, anything but the most basic technology did not work on Lyndesfarne. Anything electrical failed immediately; usually, but not always, it would start working again - sometimes erratically - when returned to the Mainland. Hardened metal alloys softened and bent, clockwork stopped, plastics became brittle and cracked. Kevin had been advised to leave his laptop computer, mobile phone and wristwatch in the boot of his car every time he went to cross the old bridge. This was good advice, Kevin thought, and worth paying attention to.

Once, when Kevin had been studying the massive bulwarks that supported the Lyndesfarne end of the bridge, and making notes in a reporter's notebook, the biro he was using had fractured in his hand as he wrote, leaving ink stains that took a week to remove. These days, he used an old-fashioned lead pencil with an eraser at the end, which always made him feel like he was back at primary school.

After all these months, Kevin was beginning to understand the depth of the centuries-old misinformation campaign about Lyndesfarne. Sure, he had heard of the place, in a vague kind of way, before he had joined the new bridge team. His first reaction had been, it seemed in hindsight, much like those of his colleagues when he occasionally ran into them in the Manchester office.

"Lyndesfarne? Oh, that's that little island up north somewhere. Hard to get to. Gets cut off by the tide, doesn't it?"

"Supposed to be something mystical about it, isn't there? Full of hippies, or New Age travellers, isn't it?"

"Never been there myself. Sounds kind of dull to me."

"Why do they want a bridge, anyway?"

Lyndesfarne was indeed shown on maps of North East England as a small and uninhabited island. The maps, and indeed the view from the Mainland coast, showed an almost bare island, with just a few windswept trees, many rocky crags and promontories, and large areas of rough grasses and sand-dunes. There was no apparent habitation and no obvious signs of cultivation, just a few suggestions of some shore-side ruins from a bygone age, although it was not immediately clear whether they were fortifications, or religious in origin.

But there was a road, and a causeway, and a bridge. And when you crossed the bridge, you discovered the deception. From the other side, Lyndesfarne was a whole world - a world in which the scientific and engineering laws, those laws which had been so elaborately and expensively drummed into Kevin's head at school and at university, simply didn't apply. It was a world as large and complex as Kevin's own, with its own rich and sophisticated way of getting things done; a world with its own history, and cultures, and languages; a world which, for want of a better word, ran on magic.

From Lyndesfarne, the Mainland of Kevin's world appeared as an island. Lyndesfarne maps showed a different, but equally bland representation, and the view from the Lyndesfarne end of the causeway was that of a heavily wooded island, with a few rocky outcrops visible amongst the trees. Again, no cultivation and no habitation. 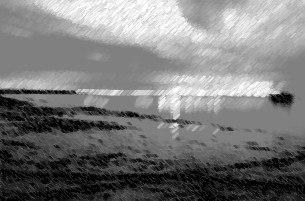 The narrow but deep channel between Island and Mainland formed an effective separation of the two worlds, and the old bridge was really the only way to cross. The sandbanks and quagmires on either side were treacherous, the sea was subject to strong tides and currents, and the weather was unpredictable and violently changeable. Attempting to use an aircraft of any kind was far too dangerous - air traffic control had long since directed aircraft away from the area, treating it as a kind of mini-Bermuda Triangle. Powered boats always failed half-way across, and even sailing was fraught with difficulties. The only real alternative to the bridge was to row a small boat, and even this was at the mercy of the weather.

The last question - why do they want a bridge - was perhaps the most poignant one, Kevin thought. What could possibly have justified the effort and expense of building a bridge centuries ago? Come to that, what was the justification for the cost of the New Bridge? And who was footing the bill for it, anyway?

He had pondered these questions on many occasions since he had first come to the Island. Part of the answer seemed to be in trade and economics. While most technological artefacts were simply useless in Lyndesfarne, there were a few things in high demand that were readily available on the Mainland. On such item was paper, much to Kevin's surprise when he caught sight of a load of cardboard boxes in a tarpaulin-covered wagon. When he asked, he was told that machine-made paper was of much higher quality than anything available in Lyndesfarne, and seemed to survive well, despite its technological origins.

Kevin had not been able to discover what was traded in the other direction. Since the magic appeared to stop working on crossing the bridge, he found it hard to even begin to imagine what goods from Lyndesfarne could be required on the Mainland.

He sighed and turned to walk back to his car, an aging Volvo. This was one of his few remaining personal possessions, most of which had been handed over to his now-ex wife after his recent divorce. He could have challenged the settlement more vigorously, or hired better legal advice, but frankly he was glad to see the back of the bulk of his possessions that would, he felt, had otherwise weighted him down.

There was a large car park to one side of the road, at the point where the causeway met the shore. This was a windswept area of stone chippings and grass, with only the most basic of facilities. Most people, it seemed, left their vehicles here and crossed the causeway on foot.

Tanji was waiting by the Volvo. She was his latest guide and interpreter, a recent arrival from the Guild of Directions. She had replaced old Ricard, who, with his perpetual inane grin and dark green clothing, had always put Kevin in mind of a wide-mouthed frog. Tanji, who was petite and fair-haired, was much easier on the eye, although her English was occasionally idiosyncratic, and she sometimes seemed to have a lot on her mind. Still, thought Kevin, I shouldn't complain. I don't speak more than six words of her language and I guess I'm not the best company, either.

"Hi. Sorry to keep you waiting."

"I was becoming a worried person", replied Tanji, primly, "All the cars look the same. I became uncertain that this was the right one."

Kevin opened the boot and shouldered the rucksack that contained his notebooks and a change of clothes. He then separated the remote locking control from the car key fob, and put it in the boot. The remote control would be useless on the Island and, if he took it with him, it might not work on his return. The simple mechanical key would almost certainly survive unscathed. The last thing he wanted was to be locked out of his car in the rainstorms which seemed to happen depressingly frequently whenever he returned from a trip to the Island.

He turned the key in the driver's door, making Tanji jump with the ker-thunk of the central locking. Buttoning the front of his bulky oil-skin jacket - zips tended to jam on the Island - he nodded to Tanji.