Death on the New Bridge: Chapter 24

It took a disappointingly long time for Bret to organise a car and driver to take Kevin and himself to University College London. Apparently, the vehicles were in short supply just at the moment; Kevin would only later be informed that this was because one of the fleet had been stolen by Tanji's kidnappers.

While Bret worried over the logistics, Kevin wandered dejectedly along the gravel paths that ran around the edge of the well-tended lawns of Cliviger Grange. At the railings at the far end of the grounds he stopped, looking out over a short drop to carefully-cultivated fields and rolling hills in the distance.

Under other circumstances, he realised, he would have appreciated the beauty of the carefully-chosen location for the Grange, and marvelled at the insight and skill of the original landscape gardeners all those years ago. But all he could think of, right now, was the loss of Tanji and his current inability to do something - anything - about it. 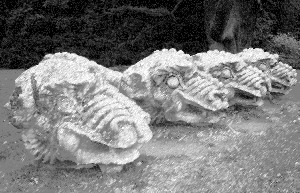 Shaking his head, he turned to continue his circuit of the lawn. Unexpectedly, he came across a set of grotesque heads, apparently carved from stone and embedded in the grass. The four carvings were partially concealed by shrubberies and made from grey stone, now badly worn and lichenous, the same material as had been used for the original walls and buildings.

If Kevin had come across these statues a year or two ago, he would have dismissed them as depicting some mythical heraldic beast - a Griffin, perhaps, or some unspecified gargoyle. But from what he now knew, and after his too-close-for-comfort experiences on safari recently, the heads looked very much like those of dragons.

He hurried closer, crossing the slightly damp grass and squatting to inspect the carvings. He ran his hand over the worn stonework, marvelling at the artistry of the depiction. It was immediately obvious that the artist was familiar with their subject. The level of anatomical detail was profound, and the unknown sculptor must have studied the original creature very closely.

Kevin looked up suddenly, startled by the crunch of a footstep on the gravel of the path behind him. It was Bret, who had jogged across the lawn to catch up with him. Kevin suddenly realised just how far he had wandered from the Grange itself.

"Nothing, I'm afraid," the other man replied dourly, "But our car's ready - finally. So come on."

Bret set off along the gravel path. Kevin fell silent, trailing along after the other man. Bret stopped and turned, watching the dejected-looking Kevin closely for a few moments.

"There's a story behind those carvings," he said, breaking into the other man's despondent thoughts, "Would you like to hear it?"

Kevin looked up, nodding. The two men fell into step along the pathway.

"Well," Bret began, "These carvings were erected centuries ago, to commemorate a gallant crew who tracked down a flight of dragons who had managed to fly undetected - or nearly so - through the barrier and over the straights."

Kevin nodded, obscurely pleased that he had correctly identified the creature so carefully depicted.

"Now this in itself was very unusual," Bret continued, "Dragons are perennially uneasy about the sea, and will not usually fly over any large bodies of water. There are various stories of how the Dragons had been persuaded to overcome their dread. Some say that the beasts were just ravenous, distracted as their hunger overcame their fear of the water."

He paused, looking askance as Kevin for a moment.

"Other tales suggest that the creatures were driven across from my world, although exactly how, or why, remains a mystery. Probably just some mischief and mayhem - although, if that is true, it must have been quite a lot of trouble for the perpetrators to arrange."

He stopped again, looking obscurely puzzled for a moment.

"Dragons are now an endangered species," Bret continued, "As I think you already know."

"But not so long ago, they were regarded as dangerous vermin. In general, these large species were left alone as long as they stayed in remote regions, but would have to be trapped and killed if they strayed into populated areas."

"In Lyndesfarne," Bret explained, "A well-trained cadre - a Guild of Dragon-hunters, if you like - existed to deal with this kind of threat. Nowadays, these men and women have been redeployed to ensure that the dragons are protected, and that they do not leave their reservations."

Kevin guessed that the weather-beaten men who had acted as safari guides for their tour were the modern-day representatives of this particular profession.

"Anyway," the other man continued, "The arrival of dragons in this world caused considerable disruption and panic - more from the human activities fleeing from the area than the depredations of the animals themselves. But there was nothing, and no-one, in your world equipped to tackle this problem."

"So this had never happened before?" Kevin asked, "No dragons in this world?"

"As far as we know, no," Bret confirmed, adding in a slightly conspiratorial tone, "Although there have been similar incidents since."

Kevin let this pass, by now more interested - in spite of himself - in the story of the stone dragon heads.

"The dragon hunters used, as a matter of course, magical - or at least magically-enhanced - weapons and devices in their trade; the kind of weaponry which was, quite deliberately, not available in your world."

"Despite this handicap," Bret continued, "A brave group of Guardians from this world was rapidly assembled, and based themselves in one of those castles not far from here, one of those you've probably noticed dotted along the coastline hereabouts."

Kevin wondered silently which of the rambling piles of stone he had indeed noted was the one, but Bret was not forthcoming.

"They were soon assisted by a very few of the professional dragon-hunters who could be co-opted across the straights at short notice. Under-equipped and inexperienced, they nonetheless tracked down the dragons - five of them, according to the stories I've heard - in short order."

"So this all happened around here, then?" Kevin asked.

"Yes, indeed," Bret replied, "Dragons tend not to travel far if they don't have to - they get contented and lazy quick enough. In any case, the impromptu dragon-hunters managed to kill them, at great risk and considerable personal bravery, and were roundly feted afterwards for their courage."

"Surely the dragons were seen by lots of people?" Kevin wanted to know, "So how was it all kept secret?"

"Of course people saw them," Bret agreed, "But this was a long time ago, and the observers were generally the underprivileged and inarticulate, those likely to believe in all kinds of myths and stories: devils and faeries, angels and demons."

Kevin supposed that medieval attitudes would have allowed all sorts of fantastical goings-on to be regarded as essentially just everyday paranormal phenomena, and therefore not really investigated in any serious way. He did wonder wryly about the obvious comparison with today's attitude to reports of UFOs.

"In any case, the authorities wanted to express their gratitude to the local heros, many of whom had never even seen a dragon before, let alone killed one," Bret resumed, "Traditionally, in Lyndesfarne, dragon hunters are presented with the stuffed heads of their first kill."

"But those aren't stuffed heads," Kevin retorted, adding more thoughtfully, "Are they?"

"No. They wanted to present them with taxidermy heads but it was concluded that even real - albeit stuffed - animals would have been too much of a risky exposure. So they commissioned carved stone heads instead."

This made some kind of sense to Kevin, being very familiar with monumental effigies of fantastic creatures on all kinds of public and private buildings.

"So why were they buried?" he asked.

"Well, we just don't know for sure," Bret said, "Perhaps it was just paranoia - a fear that even these representations might be too easily recognised."

"All right, this all seems very reasonable," Kevin replied thoughtfully, obscurely cheered by the tale, "So why dig them up again?"

"Frankly, the location of the stone carvings had been forgotten," he replied, "It was a complete accident that they were rediscovered at all."

Bret explained that, during the excavations to put in the foundations for one of the new blocks now erected in the grounds of Cliviger Grange, the workers had unearthed one of the heads. Work had stopped immediately, and more careful archaeological explorations were instigated. Three more heads were found after further extensive digging around the site.

"Legend says that there were originally five heads, but the last one seems to have completely disappeared," Bret said, "Where it is now, no-one appears to know. And there was insufficient time to complete a full investigation - the pressure to resume the buildings work forced them to abandon the exploratory diggings."

Kevin knew from his own experience that considerable delays to the construction of a building could be caused to archaeological finds, and he was aware that some less reputable contractors habitually covered up such a find just to keep the works on schedule.

"In any case," Bret concluded, "The four heads which were recovered were re-sited in the lawns where you see them now, just as a historical curiosity for students and visitors alike."