Death on the New Bridge: Chapter 22

The Beach Hotel where Kevin had stayed with Tanji for two ecstatically wonderful weeks clearly prided itself on the quality and upkeep of its facilities. For Kevin, every day was a new experience, a new wonder - often without setting foot outside the resort grounds at all.

The hotel buildings were all low, solid-looking constructions, arranged around a central open area, with well-maintained gardens and shrubbery either side of the path and steps which led down to the beach. The grounds abounded in wildlife: plants, birds, butterflies - all of which looked vaguely familiar to Kevin, and certainly nothing which would have been out of place on a tropical shore at home. There were coconut palm trees everywhere, their tall trunks featuring the characteristic unexpected twists and turns formed as they grew towards the best light. Early in the morning towards the end of their vacation, the two lovers took a walk on the beach. It was already warm and sunny as they strolled along hand-in-hand, enjoying the sounds of the sea and the light sea-breeze.

Kevin wore a pair of baggy but brightly-coloured shorts, much as he would have done on the beach at home, together with sandals and sunglasses. He was bare-headed and bare-chested, and already getting to be quite tanned, although he was careful to avoid getting burned. The fine weather and appetising food, and the fact he was getting more exercise than usual - in several dynamic ways, he thought with a wry smirk - meant that he was noticeably bulking up around shoulders and thighs.

Tanji wore a pair of the flowing and insubstantial trousers she so often favoured, together with the magical sunhat that protected her fair complexion. Between waist and hairline she wore nothing at all, to Kevin's unreserved delight, although once again she had taken the precaution of reducing the size of her breasts to minimise discomfort during exercise.

Some movement in the litter of driftwood marking the high-tide line up ahead caught Kevin's attention.

"What's that?" he exclaimed, pointing out the erratic rocking motions of a large piece of worm-eaten timber.

As he watched, a grey-brown object perhaps a foot across edged its way around the baulk. It was a few shades darker than the pale sands underfoot and of such an irregular shape that it might have been mistaken for a rock if it had not been so plainly moving.

"It's a Beachcomber," she said, "Have you not seen them around here already?"

"No," Kevin replied, although he belatedly realised that he had previously noticed that the beach was always littered with scattered rocks which never quite seemed to be in the same place two days running.

Tanji explained that Beachcombers were magical devices for cleaning beaches of flotsam and jetsam. Seaweed and other organic debris was ingested and then digested, and the resulting material was used to enrich the soil further inland.

"So it's like a Lawn Bug?" Kevin said, remembering the insect-like device which he had seen cutting the grass on one of his trips to this world in the company of Bret.

Well, that certainly helps to explain the luxuriant growth in the gardens and vegetable plots everywhere along this shoreline, Kevin thought.

They walked on, determined to explore the entire length of the beach before returning to the hotel for a light breakfast. At the end of the beach, tall cliffs and crags came down to the water's edge, leading back to the higher ground which formed the bay in which the hotel was situated. 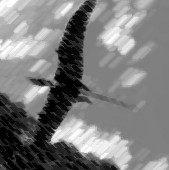 The tall trees at the top of the ridge featured an erratic collection of nests, home to what Kevin had originally thought to be large birds, but actually turned out to be a small species of fish-eating dragon.

There were several of the creatures flying overhead, soaring in the wind blowing from the sea. As they watched, one folded it winds and dove for the water, spearing though the sea's surface with barely a splash and emerging a few seconds later clutching a wriggling silver fish.

Kevin had noted the fish-hunting flying reptiles - just a little larger than the Nightwings he had seen at Tanji's home - earlier in the holiday. No one had paid them undue attention and he had concluded that they were not a risk to humans, and indeed they could be seen nesting in treetops along the heavily wooded ridges that ran parallel to the beach in numerous places.

Earlier in the week, Tanji had guided him on an excursion which started with a visit to the nearby town. With his architect's eyes, Kevin had found the entire trip absolutely fascinating. Some stalls and shops were thatched with the coconut palm tiles that Kevin would have found commonplace in the corresponding parts of his own world.

Nevertheless, most buildings here were rather heavily built and set low to the ground. Practically every construction was equipped with wide verandas and wide doors open to the breezes. Even so, the buildings were all stoutly constructed, with solid doors and heavy roofs, as well as shutters for all the windows. It was clear to Kevin that, as elsewhere in the world of Lyndesfarne, people very much preferred to sleep in stout buildings or, better still, underground. A short discussion with Tanji revealed that, here, few buildings had any basements or lower floors.

"Do they have dragons here?" Kevin asked Tanji suddenly, his train of thought emerging as a question.

Patiently, a smiling Tanji explained that this area was far too hot for the large dragons that used to live in the area around the causeway - and that they had seen on their safari - as well as being too close to the sea.

"So why are all the houses built so strongly?"

"In the old days, dragons like the ones we saw were not the only dangerous animal," she explained, "There's another, smaller flying reptile that hunts in large packs."

She hesitated, then continued.

"I'm not absolutely sure how to translate the word, but perhaps 'Raptors' would be appropriate."

"They're now extremely rare, but they can travel great distances in a short time," she continued, "Raptors have not been seen in this area for a generation or more, but people have long memories."

Always the conservative viewpoint, Kevin mused, the focus on risks and dangers from the past.

One of several differences which struck him as they walked along was that the whole local environment was rather more well-finished than many places he had seen in his own world - in parts of sub-Saharan Africa, for example. Here, there were well-metalled roads and paths, with neat borders planted with flowers and trees, even well away from the areas around the hotel - the parts he would have characterised as 'touristy'.

Tanji strolled with Kevin - something that felt extremely easy and comfortable here - to a nearby portal, one he could now recognise as a short-distance transport. The two of them soon emerged in a resolutely agricultural area, and they set off walking along roads between well-tended fields supporting a wide variety of crops, only some of which Kevin recognised. There were just a couple of large buildings visible, and the occasional isolated farmstead.

"Why have a portal here?" Kevin asked Tanji, looking back along the road at the small building from which they had just emerged.

"Well, to bring people out here to work," she replied promptly, "Both in the fields and the warehouses."

Kevin looked around. The fieldworkers had a much broader range of skin tones than he would have expected at home. Everyone seemed cheerful enough and adept at using, he had begun to note, a variety of magical devices, often rather small, to assist with the farming. He could see that much of the weeding and ploughing - all the really back-breaking jobs - were relieved by a plethora of aids.

Farm transport seemed to be an eclectic mixture of wood-wheeled carts and wagons, drawn by horses, or bullocks or even by hand, and the magic floating platforms controlled by gestures which Kevin had seen many times during the construction of the New Bridge.

"Why not use floaters for everything?" Kevin asked, his insatiable curiosity getting the better of him once again.

"Well, they're expensive, for one thing," Tanji replied patiently, "And they need a flat-ish space to set down to load and unload - and that space is not always available."

Kevin nodded. He could see that the wheels of carts could run along the rows of plants easily enough.

"And, I suppose, it's just traditional," she concluded.

Kevin was distracted at that moment by what could only be described as magic wells. These comprised of low circular walls of the construction stone so widely used in this world. According to Tanji, these wells could be simply placed on the ground and started with a gesture. After a short delay, water would start to flow, but whether it was drawn from deep underground, or precipitated from atmosphere, or by some other means, Tanji was at a loss to explain. A further advantage was that, when the irrigation was completed, the water flow could be stopped with a second gesture and the well wall could be picked up and placed elsewhere.

The combination of plenty of fresh water, natural compost and fertiliser from the Beachcombers, and daily sunshine must make this area immensely fertile, Kevin considered. He was aware that the desire experienced in many parts of his own world for fresh fruit and vegetables in all seasons, and he was finally beginning to realise that this demand was at least partially satisfied by imports from the world of Lyndesfarne.

They stopped at a farm market - a mixture of stalls shaded by coconut matting and tiles, as well as tents made from the same self-erecting magic material that Kevin had encountered on the beach. One of the few fruits and vegetables on display that he recognised were long thin green beans. Most of the others looked utterly eccentric, especially the large fruit which seemed to be a cross between a pine cone and a grapefruit.

Kevin wondered again at the anachronistic mixture of ancient and futuristic, an impression he had got everywhere he had been in this world. But it all worked, he considered, and worked well enough to have been largely unchanged for decades, even centuries.

He knew that the introduction of what even now he persisted in thinking of as new magical technology happened infrequently. Additionally, both ordinary non-magical devices and everyday items - clothes, for example - were routinely enhanced by magic and therefore had a more-or-less indefinite lifespan.

All this had led to a society which was largely fair and stable, at least by comparison with his own world, and indeed consciously conservative and resistant to change. This led, Kevin supposed, to the preference for living in extended family groups, with houses and property held collectively by the family, handed down, maintained, and occasionally extended from generation to generation.

The society was not entirely equitable, of course: some families held more wealth and property than others, or wielded more power - via the Boards, for example - than others. Even so, no one was really poor, even in this tropical region, with evidence of the same pattern of large family groups and an absence of street urchins, beggars or cripples.

This seemed to have led to stable population numbers, which had not changed significantly in generations. This contrasted markedly, Kevin mused, with the explosive growth of population in most parts of his own world over the last couple of hundred years - even now only just beginning to taper off.