Death on the New Bridge: Chapter 1

Kevin and his colleague Bret were the co-designers of the New Bridge or, more precisely, each were the designer of half of it. The half that was in the mundane world of engineering and technology had been Kevin's responsibility, while the section in the magical world of Lyndesfarne had been allocated to Bret.

The most challenging part of the whole design had been the short section where they now stood - the middle of the bridge where neither technology nor magic was entirely reliable. They had solved this thorny problem by a design where the central portion of the overall structure was largely unstressed, and then closing the gap with a laminate - alternating thin layers of steel-reinforced concrete and the magically enhanced "construction stone" favoured in Lyndesfarne. 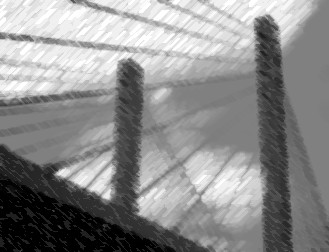 Kevin thought ruefully that pictures of this bridge would not be appearing in the usual trade publications, unlike his previous commission, a part-floating bridge in New Zealand which had attracted a certain amount of attention from the specialist press. The low-key and intricate web of secrecy that surrounded what was now the sole remaining crossing to the Other World meant that none of his professional colleagues would ever hear about the interesting technical problems they had had to solve.

Kevin recognised a few of the people in attendance at the ceremony. He had spotted Bret's blond ponytail earlier and, once the formal part of the proceedings had been completed, he and Tanji strolled over to where Bret was standing.

Bret was in his male guise, the one he had adopted for much of the period during the New Bridge's design and construction. Actually biologically female, Bret was a rare and talented shapeshifter capable of donning a - admittedly slightly boyish - male appearance. He claimed that this disguise was helpful in dealing with people from Kevin's world, where the remnants of sexist attitudes would otherwise had made some things more difficult.

Tanji had eschewed any change of form today and looked, in Kevin's extremely biased opinion, radiant. Her blonde hair was drawn up into a clasp at the back of her head, which effectively highlighted the slightly elfin cast to her features - the high cheekbones and the suggestion of pointed ears - that were, Kevin knew, so characteristic of natives to the world of Lyndesfarne.

Bret was present with his husband Eosin who, Kevin had been given to understand, had some role in the maintenance and enhancement of the magical sprites in the barrier which enforced - mostly - the separation of the Two Worlds. The sprites disrupted technological artefacts - everything from plastic biros to mobile phones - and Kevin had long since learned to leave almost everything behind when he visited. Other sprites disabled magical items, so that the magical amulets and brooches used in Lyndesfarne for so many purposes became just chunky jewellery.

Bret's mother was also in attendance, but as an ordinary member of the crowd. Her role as the Ferryman - a semi-mythical figure with a secret and central role within the Board of Control - was not publicly known. She gave every appearance of a proud mother embracing her son's achievement, although Kevin was aware of the steely glint in her eye that belied her otherwise matronly appearance.

Bret smiled as Kevin approached and shook his hand, each grasping the other man's upper arm in an expression of warmth and respect. Bret then kissed Tanji on the cheek, bending slightly to embrace her more petite form.

Kevin had not seen Bret for some time, indeed, only on one occassion since the intervention - by the Ferryman herself - which had rescued Kevin from an uncertain future and quite possibly a mindwipe.

"Good to see you both. Been keeping well?" Bret enquired solicitously.

Having left the firm of architects who had employed him while the New Bridge was being designed, Kevin had been working hard at establishing an independent consultancy, as well as spending a lot of time with Tanji. Sometimes he felt he had known her for ever, even though in reality it was only a few months.

"Oh, it's not been all work," Tanji chided, smiling naughtily up at Kevin.

Kevin could feel himself reddening slightly, but recovered quickly.

"Oh, we've been travelling widely, too."

The three people chatted for a few minutes, exchanging news and enquiring after mutual acquaintances.

"Look, I'd better go and circulate some more," Bret said finally, looking around at the gathering of the great and the good, "See you at the party?"

"Don't worry," Kevin replied, grinning in response, "We'll be there."

The other part of the opening celebrations was to be a champagne reception that evening, to be held in the 'Garden of Boundaries' - the hostel where Kevin had stayed on several occasions during the construction of the New Bridge, and knew as the 'Walled Garden'.

Kevin had not been entirely comfortable with the idea of attending a formal party, and had had to be vigorously persuaded by Tanji.

"It'll be fun," she enthused, practically dragging him towards the front door of his flat in Manchester.

"But what shall I wear?" Kevin worried, "It's got to be something OK socially and, more important, something that won't fall apart when we go through the barrier." 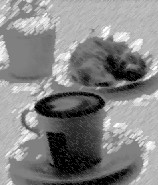 The two of them had taken the tram to one of the large shopping arcades in the centre of the city. There, they spent several hours touring gentlemen's outfitters of all descriptions, a process which required, in Kevin's opinion, frequent fortification with cafe lattes and Danish pastries.

Kevin eventually settled on a linen suit in a pastel shade of mint-green with a pink silk shirt and a tie which he was assured went well with both shirt and suit. He felt compelled to ask a bemused tailor to remove the modern efficient zip in the trousers and replace it with a set of cumbersome bone buttons. Even rather simple machines like zip fasteners tended to fail in Lyndesfarne, and he did not relish the embarrassing prospect of struggling with a jammed fly when caught short.

This was not Kevin's usual style of dress but he found the whole thing somehow a liberating experience. As promised, the party was a glittering occasion, with champagne and other drinks flowing in copious quantities. Kevin was amused to note that the champagne had indeed been imported from France. Apparently, this sparkling wine was particularly popular in many parts of Lyndesfarne, and it was imported in large quantities.

Kevin was not particularly fond of sparking wine, and sipped cautiously at his drink while circulating politely amongst the guests. Tanji was his constant companion, always at his elbow and ready with a smooth translation when necessary. Fortunately, this was not required very often as it turned out, since many of the other guests recognised him, or at least had inquired who he was.

Kevin's role in unmasking the criminals who had attempted to prevent the completion of the New Bridge, and to infiltrate embargoed magic into his own world, was officially not widely known. Kevin himself had been strongly advised to maintain a strict silence. Needless to say, therefore, speculation and rumour were rife, and he had overheard numerous explanations of recent events, none of which were more than three parts in ten true.

Apart from Bret and Bret's husband and parents, Kevin recognised Professor Braxton and some of her colleagues from NISSA. Kevin had visited the Newcastle Institute of Special Sciences and Arts on numerous occasions over the last few years. It was one of the few places where, if you had the right kind of introduction, it was possible to get detailed briefings - and at least some kind of explanation - about the strange world on the other side of the crossing.

In Lyndesfarne, Kevin knew, magic - there was no other reasonable word in English - was used pervasively, while all but the simplest of machines were unknown. They had a sophisticated and reasonably equitable society where everyone, it seemed, had access to magic for comfort, travel and entertainment. Magic was controlled by a complex language of manual gestures, something learned from childhood, and one which Kevin was still struggling to comprehend. Tanji assured him that he was getting better quickly and Kevin felt himself to be more competent in the syntax of gestures than the spoken language.

Peter Brenner, the Project Manager from Kevin's old firm of architects, was talking to Kenneth Nasterton, a Senior Managing Partner from the same company. Nasterton was a crashing bore, who had fortunately kept out of the way during most of the New Bridge project, and Brenner seemed to be fully engaged keeping the old buffer out of mischief. After a slightly shaky start, Kevin had gained a good deal of respect for Peter, especially when he had belatedly discovered that he was also an agent for the Ferryman. 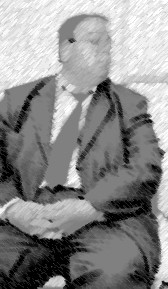 Kevin could also identify the rotund bulk of Duncan Tweedy across the room, flanked as always by several flunkies and bag-carriers. He ducked away quickly, not wishing to be buttonholed by the man. The opportunity of attending a party had apparently had little effect on Tweedledum's sartorial appearance except, he mused, for a tie of more than usually execrable taste.

Apart from the incognito Ferryman, there were several other representatives from the Board of Control, none of whom Kevin knew personally. The Board members, no doubt weighed down with complex matters concerning the governance of the crossing, tended to keep themselves to themselves, and stood quietly at one end of the room.

Kevin recognised several people from the Board of Construction who had participated in the erection of the bridge. He chatted briefly with Craz the Overseer and the instantly-forgettable Quarl. Graeme Greysmith was not there, however. Kevin had quietly recommended to Peter Brenner that the creatively lazy Smudger not be invited, given his all-but-invisible contribution to the work.

Kevin was not someone who drank a great deal, although he enjoyed a glass of wine or a pint of beer on the odd occasion. He could see that Tanji had enjoyed the champagne this evening and was now getting just a little tipsy, and he was very pleased that he had managed to secure a room overnight here in the Walled Garden. He certainly did not want to drive afterwards, or take a long taxi ride - or even a trip by portal.

The "Garden" was a lot bigger than he had first thought. There were six levels underground, as well as a ground and a small first floor. On previous visits, Kevin had always been placed on the ground floor, in perfectly acceptable if rather ordinary accommodation. When he discovered the rooms underground, he noted that the hostel also had some rather fine suites and he had managed to secure one of these for this evening.

After several hours of socialising and circulating, Kevin and Tanji finally managed to escape from the party. Tanji by now was rather giggly and hung on his arm on the way down to their room. He avoided the lift, since he was not absolutely sure he could remember the gestures required, and they made their way carefully down the stairs to their room.

Giggling, they undressed quickly and practically fell into bed together, being altogether too tired to do anything much before falling into a deep sleep wrapped in each others arms.