After lunch, the four men returned to Briz's study, where the older man practically collapsed into a chair. He waved at the others to take seats.

"We've been out and about a fair bit recently," Bram said, with what Tom took to be laconic understatement.

"I think you always get around rather a lot," Tom remarked shrewdly.

Bram laughed out loud, and even his father's face cracked into a sardonic smile.

"And what, exactly, is your job?" Tom asked, quite genuinely interested. He had speculated on this very topic more than once over the last few months, and he had certainly entertained a few suspicions of his own.

"To explain that, you first need to understand what my Dad's position actually is," Bram replied, looking at his father.

"I am a full member of the Board of Control, and I have a seat on one of the outer Boards concerned with the management of the Guardians."

"So you're in charge of the Guardians?" Alistair asked.

"No, no, nothing like that," Briz laughed, "Normally, I act in an advisory role, collating reports from our agents and other visitors to your world. I give advice to the Inner Board, when they ask for it - and sometimes when they don't."

"A bit over-dramatic, but probably not too far from the truth."

"And now I can explain my role," Bram interjected, "Put simply, I'm one of my father's agents."

Tom was not entirely surprised by this, and he also got the strong impression that this was not shocking news to Alistair either.

"So that's what you were doing in our world during the War, then?" Tom asked.

Bram glanced at his father, who raised an eyebrow.

"That's right," he replied, "My father, and the Boards themselves, wanted first-hand reports on the progress of the War, so that they could decide on a course of action concerning the crossing. I was merely one of, I strongly suspect, many such agents in your world during the conflict."

"Is that what you were doing, writing in that little notebook of yours?" Tom wondered aloud, "Writing reports?"

"Yes," Bram replied, suddenly looking a little uncomfortable, "And I would later arrange for my reports to be communicated back to my father."

"Yes, I get reports all the time," Briz said quickly, "Delivered by the Messengers, sometimes, or using the slates." 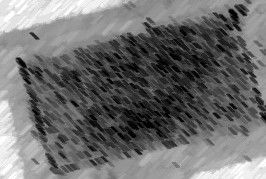 Tom again wondered about Bram's notebook. He had learned a great deal about the properties of magic over the last few months, during his training classes back at Cliviger Grange. Now, he was struck by the similarity between Bram's notebook and the magical writing slates widely used in the world of Lyndesfarne.

Even so, he had been told continually that no magic now worked in his world, and no complex technology would work in the Other World. Apparently, this was because of the properties of the barrier between the worlds, which disabled magical items crossing from Lyndesfarne, as well as causing all kinds of sophisticated machinery to fail immediately.

Tom did not believe it. He suspected that there was a secret method of evading the effects of the barrier, some way in which otherwise proscribed items could be moved between the worlds without damage. Things like Bram's notebook, and perhaps others items, too.

He wondered about invisibility, a magical capability usually embedded in an item of jewellery - typically a brooch or bracelet. Maybe Bram had been equipped with such an accessory, given the way that Bram had appeared right in front of them on their first acquaintance in that moonlit Normandy field.

Even so, he could not think of a reason why the magic should have suddenly failed, and it had certainly put Bram's life in danger, so it was unlikely that he had switched - or gestured - it off just at that moment. Conceivably Bram had just been unlucky, but even Bram's luck, which had served him so well on many occasions - if only to get a seat in a pub - might itself be enhanced magically.

"We should talk about Hamet," Bram gently prompted his father.

"Yes, yes, we should," Briz returned, "Although I confess that I've run out of ideas of what to do about that situation."

He paused thoughtfully for a few moments, staring into the middle distance and rubbing his chin ruminatively.

"Hamet had gone out riding, something he does not do very often these days," Briz said, "Although he was once a reasonably accomplished horseman. He borrowed one of my daughter's horses and set out, proposing to ride one of the local tracks. When he was late in returning, we initially assumed he had simply got lost."

"I've ridden those trails with Yise," Alistair interjected, "They're pretty well marked, and it's hard to imagine going astray. A child could follow them."

"That's right," Briz agreed, "So we began to think he had had some kind of an accident, a fall in the woods - he was out of practice with horses, after all. When he did not return on time, Preda, his wife, got increasingly worried, although she does tend to fret a little bit too much. Once we finally concluded that Hamet really had gone missing, we contacted the local police, as well as the Guardians and various parts of the Board."

"What's Hamet's role?" Tom interjected, "Does he work for the Board of Control as well?"

"He has a more minor role in the boards," Briz replied, "In a group that liaises with the organisations which handle portals and transport here in Lyndesfarne."

"A search of the local area, by the Guardians and other civil forces, found nothing," Briz continued, "But while the search was going on, someone found Hamet's horse wandering nearby, seemingly intent on making its own way back to the stables."

"Was the horse all right?" Alistair enquired.

Briz nodded, smiling wryly at the younger man's expression of concern for the dumb animal or more likely, Tom thought, for the feelings of the horse's owner.

"On this news, we redoubled the search efforts, although we still could not find the man himself. However, we detected signs of a struggle in the woods."

"There's a disused building on the trail, which was at one time the works of a timber company. It's now in a very decrepit state of repair."

"Yise pointed out the old lumber mill when we were riding," Alistair said, "It's little more than a few stone walls and mounds of rotting timber, all heavily overgrown. It's almost invisible in the woods."

"That's right," Briz confirmed, "Even so, at one time, the building contained a goods portal, used to transport the cut timber to other parts of our world. Of course this was shut down a long time ago. But, when we investigated more closely, there was a suggestion - no more - that this portal had been used recently, and it is just possible that whoever abducted Hamet had somehow re-instated the portal, albeit briefly, to whisk him away."

"What do you mean?" Briz said sharply.

The other men nodded.

"When I ran into him the second time, when he warned me about dragons being captured, he said he had lost the dragon hunters he was trailing, that they just seemed to disappear. He said he thought they might have used a hidden portal of some kind."

"You never told me that bit of the story," Bram said reprovingly.

"Well, he wasn't certain," Tom responded apologetically, "And he did seem slightly embarrassed even to be suggesting such a thing."

"It wouldn't be entirely impossible," Briz said slowly, "Our world is littered with disused portals. It's not uncommon to see the characteristic shape of their arches in ruins, or even in buildings in regular use."

"So what does it take to re-open a portal?" Alistair asked.

"Well, it's a substantial undertaking, required the same amount of effort and time as the original," Briz said, adding as an afterthought, "Although the exertion can be considerably reduced if you can use the detailed records from its construction."

"Why is that?" Alistair pressed.

"Oh, it's just because it is much easier to repeat the precise sequence of steps without having to discover the, well, alignments and tensions for yourself."

Tom knew that the words just used by Briz were the English translations of some basic steps in the construction of magical items of all kinds.

"But those records are supposed to be kept safely in the Board of Transportation," Briz continued.

Tom thought for a moment, then asked a little diffidently, "Would Hamet have had access to these portal records?"

Bram and Briz glanced at each other, suddenly looking worried.

"Perhaps," Briz conceded slowly, "But who would want such information? And, more importantly, what would induce my brother to give it to them?"

"Father," Bram piped up, "You know those reports that some quasi-military group is being assembled in secret?"

"Of course I know about them," he muttered, "But there's nothing to substantiate these rumours. Official accounts have of course been circulated to the Guardians on both sides, but there's been no corroboration."

"True enough," his son agreed, "But they could be the same group as the dragon-hunters Ged told us about, or at least organised and commanded by the same conspiracy. And, it would be exactly that kind of group who might want access to a private portal network."

There was a sudden silence while Briz glowered in the direction of the fireplace.

"What's going on?" he erupted eventually, "This could be much bigger than I thought. Not just the maniac scheming of a few madmen. And this is not the only recent disappearance of a member of the Boards."

"Yes," Briz replied, looking sharply at the younger man, "What do you know about that?"

"Well," Alistair began, "I was a Guide for Tarm recently. But I'm not supposed to speak of what I see or hear when assisting a Visitor."

Briz looked thoughtful for a moment, then said quietly, "I think, on this occasion, you would do more good if you were to put aside your oath of secrecy."

"Well, OK," Alistair said, equally quietly. "Well, I was assigned to guide Tarm a few weeks ago. It was my first assignment without my Guide Master. And I came here, to this house to collect him."

"Well, yes," Alistair said, taken aback, "It wasn't a secret. Yise and her mother knew I was here."

"Yes, well," muttered Briz, "But you're always hanging around this house, for some reason."

"Even so, I didn't realise that you were here in an official capacity."

"Well, I was," Alistair insisted, "When I arrived, Tarm was in conference with Hamet. I waited around for ages then, when they had finished, I guided Tarm over to the other world."

Alistair then repeated what he had already confided to Tom, about Tarm's meeting with Major Markham in the pub in Alnwick.

Tom himself piped up at this point. He told the assembled company, to their increasing interest and concern, about the meeting he had inadvertently seen between Markham and Hamet, in the hidden garden at Cliviger Grange.

At the conclusion of his story, there was a silence, as everyone digested the importance of the information just imparted. Briz stood up and paced the room impatiently.

He was still and silent for a few seconds.

"Well," Briz said finally, rubbing his hands together, "It seems to me that our next action is obvious: we need to talk to Warden Markham, as soon as possible."