As well as guarding the causeway and bridge, another regular Guardian's duty was patrolling the coast to both north and south of the crossing. On this occasion, in the springtime a few months before his graduation, Tom was once again in the role of trainee and apprentice, with Fred as the master. The two men were both dressed in the rather nondescript clothing that passed for a uniform for the Guardians and which, Tom imagined, had been carefully designed to be obvious to those in the know while simultaneously appearing wholly unremarkable to the general populace.

The two men had set off from the guard post at the causeway an hour or so before, and were now taking a break from their patrol. They stood looking out to sea, enjoying their cigarettes and watching the breakers crashing on the rocks at the foot of the cliffs below. To the south, the rugged coastline was dotted with many islets, some only visible at low tide, abutting cliffs which rose forty feet above the sea. Both islands and cliffs provided roosting spaces for thousands of seabirds whose cries could be heard over the rumble of the waves. 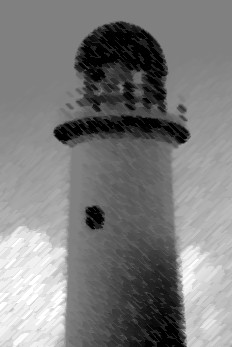 Away from the straights, the weather was much less overcast, and they could clearly see the white-painted stonework of the old lighthouse standing out against the grey-blue of the skyline. Tom knew that this whole area was notoriously dangerous for shipping, with treacherous winds and tides, and hidden rocks and razor-sharp reefs just below the surface.

Fred took a last drag from his cigarette and flicked the butt into the sea below. He turned to Tom.

"You see that lighthouse tower out there?" he asked, indicating the direction with a jerk of his head.

"And have you heard that tale about Grace Darling?"

Tom did vaguely remember hearing the story; perhaps it was something he had read in a book at school.

"Um, yes," he replied, "A daring rescue. Grace and her father rowing out to rescue the crew of a stricken ship. Didn't they come from that lighthouse?"

"Ha. That's the story that was put about. The truth, on the other hand, is rather trickier."

"So what really happened?" he asked breathlessly.

Fred took a second hand-rolled cigarette from a battered Woodbine tin in his pocket and lit it, clearly in the mood for storytelling.

"Well, it was true that it was a wild and stormy night," he began, "And that a ship called the Forfarshire got into serious trouble off the coast not very far from here."

Fred paused and took a drag from his roll-up, probably for dramatic effect.

Tom could not help sucking in his breath in surprise.

"You have to remember that this was in the early days of steam-powered shipping," Fred continued, "And, for some reason, the ship's engine failed. At the time, it was reported that the breakdown was because of a lack of maintenance of the boiler."

"But that wasn't the real reason, was it?" Tom responded, insight striking.

"No, of course not," Fred grunted, "The ship passed too close to the island and suddenly lost power, because of the effect of the barrier between the worlds."

"So, who were the rescuers?" Tom asked, "And where did they come from?"

The older man's face twisted into a wry grin.

"The rescuers were called Graz and Farrar. They were part of the Lyndesfarne Guardian force, keeping watch along the coastline, much as we are doing today. Oh, and they were actually both female."

"Women?" exclaimed Tom, "But how could one of them be mistaken for a man?"

"For one reason or another, before they crossed out of Lyndesfarne, Farrar decided to shape-shift. By good fortune, she was one of those rare people with a natural talent for radically changing their shape."

Tom did not know very much about shapeshifting. It was not something that had featured extensively in the classrooms at Cliviger Grange. There had been a suggestion that people from Lyndesfarne could subtly alter their appearance, but he was astounded to learn just how much some people could change.

"So Lyndesfarne people can change from being a man to a woman?" he asked.

"Only a very few people can change that much. And, in any case, they don't actually change from man to woman - or the other way around, for that matter. It's cosmetic, that's all."

Tom nodded slowly, having just been presented with a great deal to think about.

"Anyway," the other man continued, "Somehow, Graz and Farrar spotted the ship in trouble, and bravely, or perhaps foolishly, rowed out in a small boat - the only one they could locate at short notice - from the Lyndesfarne coast."

"Well, of course, they didn't really row - at least, not all of the way. Their boat was equipped with, well, let's call them sea-sprites."

"They're a magical means of propulsion for boats and ships of all sizes. Not sure I can really explain how they work, though."

The older man shrugged, then returned to his tale.

"The story you've heard before says that Graz and Farrar rescued nine people from the wreck. That's true enough, but the two women knew that they could not return to Lyndesfarne without risking exposing the secret of the Two Worlds. So they were forced to take the rescued crew to the lighthouse - that one there - which was, very strangely, unmanned at that time."

"Unmanned?" Tom parroted, again surprised by the turn of events.

"Yes. Another part of the mystery which has never been cleared up," Fred confirmed, "There was supposed to be a lighthouse keeper and a small staff, but they had vanished without trace."

The older man paused for a moment, staring out to sea in the direction of the lighthouse.

"At the time, there was some suggestion that the Forfarshire had approached the barrier deliberately, perhaps hoping to make their way into the World of Lyndesfarne without using the official crossing, perhaps even without being observed."

The older man shook his head, then continued.

"You have to get a long, long off the shipping lanes before you encounter the barrier. And the reefs are already pretty hazardous before you get that far. Perhaps the captain was bribed or coerced in some way, but nothing of the sort was ever proven."

"Indeed, the ship's owners were prosecuted for negligence after the event, and fined a considerable amount. Ironically, a side-effect of the rescue from Lyndesfarne was improved standards of inspection and seaworthiness for steam-powered vessels in this world."

"But what happened to Graz and Farrar?" Tom pressed.

The other man looked at him strangely for a moment, then continued.

"Funny you should ask."

Fred explained that a rapidly manufactured cover story held it that 'Grace' and her 'Father' were local people, employed to look after the lighthouse. A family background was fabricated, which made it look as if 'Grace' lived with her parents in the lighthouse, as well as an extended family - siblings, grandparents and the like - living on the mainland.

"And I suppose," Tom interjected, "That their new identities were chosen to sound at least a little like their real names?"

"I was told that they expected that it would all be a five-day wonder, that it would all blow over very quickly. But somehow, the story came to the attention of the newspapers, and there was an explosion of interest. Apart from reports in the national press, the two Lyndesfarne Guardians were subjected to a ludicrous number of interviews, which in turn led to numerous eulogies, many of them fanciful in the extreme."

Fred turned back to face the sea.

"And then there were the pictures," he continued, "Paintings and engravings, again generally executed with more imagination than attention to the actual events of the day."

"The girls tried to let it be known that they preferred their privacy, but it was no use. For some reason, the furore was kept up long after one might normally have expected the public interest to have waned. Not to mention the newspaper reporters and journalists, who seemed unable to leave them alone."

"The two women also seemed to attract more than their fair share of crankier types - spiritualists, mediums, occultists - some of them, well, nutty than a fruit cake, as I've heard it told."

"But why did they get all this attention?" Tom pressed.

"Well, that's the puzzle." Fred replied, "It's almost as if someone wanted them to be continuously in the spotlight of the public eye. Certainly, they found it impossible to quietly disappear, and return home."

"So, Graz and Farrar were forced to maintain an assumed role for the rest of their lives, just to protect the secret of Lyndesfarne?" Tom asked.

Tom wondered what it would be like, to be trapped in a foreign world and, even worse, in an alien body shape. He shook his head sadly. A different thought then occurred to him.

"Surely there have been other occasions when boats have tried to make their way to Lyndesfarne?"

"It seems that attempts to cross like this almost never happen. It's certainly been tried a few times in the past - like the story I've just told you. But it's always ended badly. These days, frankly, it's regarded as suicidal. No-one's attempted it in years, not even the Germans during the War."

The older man paused, once again for dramatic effect.

"They, of course, tried a different approach."

Tom, who was just beginning to think he was getting some kind of understanding of the history behind this, was stunned. Fred had clearly spotted Tom's reaction.

"And there's another tale, which will have to wait for another day."