Tom sometimes thought back to the strange occasion when he and Alistair had first met Bram.

It was during that period of the War after the landings on the coast of France, when the Allied forces seemed to be interminably bogged down in Normandy. Tom and Alistair had come ashore in a later wave, once the beachheads had been established, and it was possible to get up the beach without actually being shot at. Once ashore, and deployed to the front line, things began to get altogether much nastier for the troops. 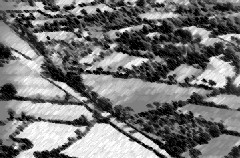 The theatre of operations was rolling countryside with thick hedges separating the fields, known as the bocage. Describing these field boundaries as "hedges", Tom considered, gave rather the wrong impression. These were not a row of slender twigs at the edge of a suburban garden, but were huge earthen ridges, four or more feet high, with a deep ditch on either side. These earthworks were heavily grown with trees and shrubs, and had probably been in position for several hundred years.

These mighty hedgerows had evolved over the years to stop cows from straying, and to prevent precious soil from being washed away in the winter rains. They were a very effective barrier to rapid traversal, on foot, in trucks or even track-laying vehicles. It was impossible to see very far - there could be an enemy platoon or armoured vehicle just behind the next hedge, which might be less than a hundred yards away. It was all very different from the flat and open fields of East Anglia, where he and Alistair (along with thousands of other soldiers) had been training for the invasion.

The unfamiliar terrain was difficult for men and tanks alike. The enemy had deployed some highly-effective ground-based anti-tank weapons, which were capable of firing their rockets though the hedges. Conversely, the enemy's own tanks were under constant threat from the air. The rate of advance was very slow, and Tom and Alistair often perceived no movement in the position of their unit for days on end.

This stalemate meant that, on both sides, the Infantry was well dug in, and the tanks were carefully hidden under camouflage nets and in hastily-constructed shelters. It appeared to Tom as if no-one seemed quite sure whether it was better to take cover in trenches right under the tanks, which provided protection from small arms fire, or to keep away from the vast machines, in case they were spotted by one of the enemy's self-propelled rocket launchers.

On this occasion, Tom's unit had dug in for cover during the night in the lee of one of the bocage hedgerows, and well away from the tank divisions. As per standing orders, and because they were on the front line of a battle zone, they had posted guards on watch through the night. Since it was summertime, it was really only truly dark for a few hours.

At midnight, Alistair had come to relieve Tom, who had been on watch for the early part of the night. He had spent the last few hours peering out from under a low-hanging camouflage net. It was a warm and clear night, with enough light from the waning moon to be able to see clearly across the adjoining fields.

Alistair was yawning widely, not having got very much sleep for what seemed like forever. Tom greeted his arrival with a casual wave.

"Who's that?" Alistair whispered, looking over Tom's shoulder.

"Where?" Tom responded, spinning around.

Alistair pointed a finger across the field. From their foxhole, they were plainly able to see a man standing alone, not far from another of the hedges and perhaps only fifty yards away.

Tom could not understand how he had missed the figure before. He was quite sure he had not fallen asleep while on guard duty, but the man was in full view, some way from a hedgerow or any kind of cover. It was, Tom thought, as if he had just appeared where he stood.

As they watched, the peculiar figure stood motionless for several moments, and then strolled to a new position, as unconcerned as if he was walking down his local high street. He did not appear to be armed, but he was wearing a regulation Army tin hat. Tom and Alistair could see well enough to be sure that the helmet and uniform he was wearing was exactly the same as theirs.

"He shouldn't be wandering about like that," Alistair commented quietly, "Whoever he is, he's going to be on the receiving end of a right bollocking from the Sarge."

"Too right!" the other man responded.

"But what is he doing out there?" Alistair continued, "Can you see?"

The strange man appeared to be making notes, or perhaps sketches, writing diligently in a little jotter, and quite oblivious to his surroundings. Even from that distance, it seemed to Tom that there was a very slight glow of light coming from the notebook itself.

Just at that moment, there was a muffled crack of gunfire and a spurt of dust as a bullet hit the ground only yards from the mystery man.

"Sniper!" shouted Tom, cupping his hands to his mouth to make himself heard, "Take cover!"

The stranger looked up, somehow appearing astonished to see Tom and Alistair looking at him, and then belatedly dived for the ground. Just as he did so, a second shot rang out. He cried out, clutching his leg.

The eccentric man was evidently still alive, and had managed to roll himself into a low ditch to one side of a hedge. There was very little cover, and as soon as he tried to move or stuck his head up, there would be another crack and a puff of dirt as a bullet struck close by.

"We've got to get him!" Tom said, "He's pinned down. He'll be a dead duck if he stays there for much longer."

Tom slung his rifle across his back, and the two men set off across the moonlit field, moving as quickly as they could and zigzagging wildly.

They could see the muzzle flashes of the rifle being used by the sniper and hear, rather than see, the whine of the bullets around their ears.

Alistair opened fire with the machine gun while on the run, never a good way to actually hit any target with such a weapon. Even so, it must have been close enough to disturb the sniper's aim, since his shots became more rapid and less accurate.

The covering fire gave Tom the chance to reach the stranger, lift him up over his shoulder, and make a dash for it. Alistair sent further bursts of fire across the field, and the men raced back. Followed closely by Alistair, Tom finally dived head-first into the deep foxhole from where they had first spotted the figure in the moonlight.

Alistair nodded in response, also gasping after their efforts.

The two men turned their attention to the stranger they had just rescued. He was clutching his leg, obviously in pain, and blood was seeping through his fingers in an alarming way. He seemed wild-eyed and delirious, or perhaps just in shock.

"We've got to get him medical attention," Alistair said urgently.

"Come on, then," Tom responded.

Supporting the wounded man between them, they manoeuvred their burden through the run of trenches and foxholes that along the line of the hedgerow. They kept as low as possible, but Tom expected to hear the whistle of a bullet at any moment. Mercifully, they appeared to be out of the sniper's line of fire, since there were no further shots.

They had covered a couple of hundred yards when they encountered two stretcher-bearers, who had jogged up in response to their previous call. Tom and Alistair eased the wounded man onto the stretcher while the paramedics expertly tied a tourniquet tightly around the man's upper leg to staunch the flow of blood. They then picked up the stretcher and whisked the wounded man away.

It turned out that, by incredible good luck, the man they had rescued had been little more than nicked by the sniper's bullet. The wound had bled profusely, but the shell had entirely missed bones and nerves. The two rescuers would later learn that he had been patched up in a field hospital and sent back, at his own insistence, to the front line after only a few days. They also discovered that he was in fact attached to the same unit as Tom and Alistair, although both men thought it was slightly strange that they had not even glimpsed him during the long weeks of training back in England.

It was a week or so later when the stranger sought out Tom and Alistair, making his way along the line of trenches behind yet another of the bocage hedgerows.

"I wanted to thank you for rescuing me," he said, shaking first Tom and then Alistair's hands vigorously.

"It was nothing really," Alistair confirmed modestly, as the rescuers introduced themselves in turn.

"But what were you doing out there?" Tom pressed, "You must have known it was dangerous out there."

"You know, I really don't know," Bram replied, shaking his head pitifully, "I think I must have been sleepwalking or something, some kind of temporary madness. But I'm fine now."

Tom was not entirely convinced by this explanation. He had seen men overcome by the horrors of war, with the stress and dreadfulness of the conflict causing sleeplessness and nightmares. He felt that he himself was, at one time, verging on this state. From personal experience, he knew that battle fatigue led to poor judgements, irascible behaviour and snapping at others for no very good reason.

Sleepwalking around a battlefield, while outlandish enough to denote incipient insanity, was not something he had ever heard of. In any case, Tom never quite forgot that look of shocked surprise on Bram's face when he saw the two men looking directly at him across that moonlit field.

Still, it did seem to Tom that Bram was a lucky man, and certainly one possessed of large amounts of charm. The three young men became close comrades over the next few years, surviving several close shaves as the Allied forces broke out of their beachhead in Normandy, and started their drive across Northern Europe towards Berlin.