It was late in the afternoon when the three companions found themselves walking into a small village on the Lyndesfarne side of the causeway. They were all feeling rather tired and footsore after their long hike. Bram looked around, suddenly smiling and then skipping forward with renewed energy.

"Well, lads," he exclaimed, "We've arrived. I recognise this place. In fact," - he indicated a prominent sign on a building a short distance ahead - "There's the old 'Nest'. A pub we could stay at tonight, if you like."

The prospect of a convivial hostelry with decent beer and warm beds definitely appealed to Tom. Alistair appeared to have the same initial reaction, but then asked Bram a question.

"I thought we were going to get to your family house this evening."

"Well, yeah, we could carry on," Bram agreed, "But it's a good couple of hours walking from here, and it would be dark by then. Besides, I for one could murder a pint right now."

This seemed to meet with unanimous approval from the thirsty young men.

"Or we could stay in the coaching inn - the 'Walled Garden' - just up the road," Bram continued, "But the beer's better here. Right tasty it is, or at least it was when I was last hereabouts." 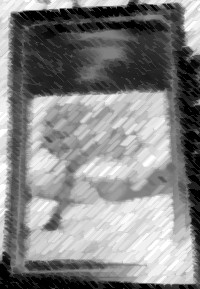 "OK," said Tom, glancing at Alistair and answering before he could make any more objections, "The pub it is then."

Even as they got closer, Tom could not make out the words on the pub signboard. The picture on the sign clearly showed a large and unruly nest of twigs in a leafless tree. The lettering was impossible to read, and seemed to be written in some angular script Tom had not seen before.

"That's peculiar writing on the sign," Tom said to Bram, "I can't read it. What does it say?"

Bram pushed open the thick wooden door, and the other two followed him inside. He moved swiftly over to the bar, which was almost deserted at this early hour, and looked approvingly up and down at the bottles and pumps arranged in front of him. The other two joined him, dumping their packs on the floor.

The barmaid was a young woman who looked very much as if the word "buxom" had been invented especially for her. Seeing the travellers arrival, she smiled in a friendly way which emphasised her peculiarly promenant cheekbones. Guessing correctly that they were visitors, she addressed them in English. 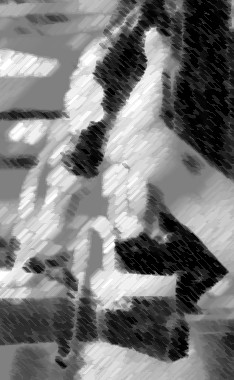 "Want to try the local bitter?" he asked.

The barmaid pulled the pints expertly, her muscular arms working the beer engine smoothly. She placed the glasses in a neat row on the bar to allow the ale to settle, and then topped them up one by one.

"Drinks on me, lads," Bram said, pulling out the cloth bag he had acquired at the crossing and passing over some coins to the girl. The three men eagerly grasped their beer glasses, and raised them to each other.

They drank deeply. The beer was a fairly conventional hopped ale, pleasantly full-bodied, Tom considered, but surprisingly light in colour. It was quite different from the dark ales they had drunk in the pubs in the village, on their regular outings from the farm. And it was certainly very much better that the ditchwater they had consumed in that station pub in London. 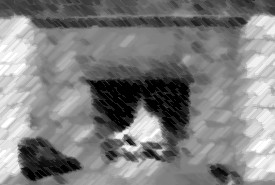 After a certain amount of savouring and smacking of lips, the three companions took their beers and packs, and moved to sit by the fire. It was already getting cooler in the evenings, and a log fire was burning low in the huge fireplace. Together with the reassuring thickness of the stone walls, this gave a wonderful sense of warmth and security, with the flickering flame illuminating a large supply of split logs drying on the hearth.

They put their glasses on a round wooden table, clearly showing the scars of long use. Tom and Alistair sat on a long high-backed settle in one corner of the room, upholstered in scuffed leather, which felt strange to the touch and had odd patterning embossed into the surface. Bram sat himself on a hard wooden chair opposite.

At this point, they were approached by an older woman who was self-evidently the pub landlady. She was a large and matronly lady, obviously the mother of the buxom lass who had served their pints, and firmly in control of all goings-on in her inn.

"Well, my dears. Strangers in these parts, are we?" she addressed them directly.

Tom and Alistair nodded vigorously, sitting up straight and trying, as Tom's Granny might have put it, to look intelligent.

"We are, Ma'am," Alistair responded politely, speaking for all of them, "On the march, and just passing through."

The landlady appeared to take pity on the three rather quiet young men.

"Well, you will be wanting accommodation for tonight, then?" she asked.

Tom and Alistair nodded in unison.

"There's a quiet room in the basement which might suit you boys," she continued, "Not large, but the beds are comfortable enough, I promise you."

"That would be wonderful, Ma'am," Bram interjected, "And I'll arrange payment for us all in the morning."

The landlady half-turned to go, then stopped and returned her attention to the travellers.

"And will you lads also be wanting a spot to eat?"

Tom was certainly feeling famished after their long trek, and nodded appreciatively. He was joined by the others.

"My stomach thinks my throat's been cut," Alistair answered cheerfully. 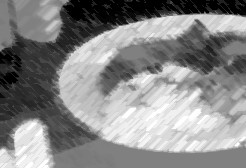 "I dare say you could all do with a bit more meat on your bones," the landlady said, smiling, "There's a Pot Luck dinner in the kitchen. I'll get you some brought over directly."

Filled plates and wood-handled cutlery were delivered by the barmaid a few minutes later. Dinner turned out to be a meaty casserole with dumplings and root vegetables, well flavoured with herbs, although Tom was not sure exactly what the meat actually was. The stew was hot and tasty, and served with piles of boiled potatoes dressed with herbs and lashings of butter - an unaccustomed luxury in wartime Britain, Tom knew.

The three men cleaned their plates rapidly, focussing on their food with that concentrated heads-down attitude of young people who never quite got enough to eat. Once they were replete, the three of them pushed back their plates, sat back in their chairs and looked around at the bar.

The rest of the large bar-room was furnished with worn wooden stools and tables, with a stone flag floor scattered with sawdust. The walls were decorated with faded prints and horse brasses. What light there was came from lamps clustered around the bar and set on a few of the tables. The hostelry had been filling up while they had been eating, and most of the other tables were now occupied.

By their appearance, most of the regulars were old countrymen, judging by their ruddy complexion and rough clothing. There were quite a few younger men, and rather more young women that Tom would have expected. The young people wore brightly-coloured shirts and blouses, and tightly-fitting trousers regardless of gender. Even so, it was not all that dissimilar to the crowds in the village pubs they had frequented over the summer.

Stretching, Tom looked up over the fireplace. Suddenly, he sat bolt upright, squinting into the gloom.

"What the hell is that?" he almost shouted. Bram and Alistair followed the direction of his gaze. 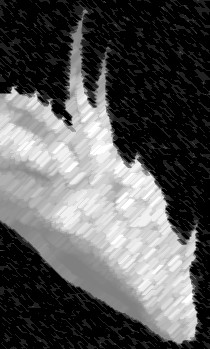 High up on the wall was a large stuffed head, mounted on a dark wooden board and taking pride of place over the fireplace. The head was at least eighteen inches from snout to neck. The mouth, almost a beak, seemed to be filled with vicious-looking teeth, like those of the crocodile that Tom had seen in a zoo as a child. It was hairless, as far as he could see, and had no visible ears. Eyes, obviously of glass, had been added by the taxidermist. He had no way of confirming the accuracy of the representation but, if it was correct, then the creature's eyes were large, yellow and reptilian. It was completely unlike anything he had ever seen before.

"I've never seen anything like it," Alistair said in an awed whisper, confirming Tom's view.

"You young fellas seem impressed," a voice said behind them.

As one, they turned to face the speaker, who had seen them looking at the stuffed head, and probably overheard something of the conversation. He was a grizzled, wiry old man who, despite his evident age and weather-beaten appearance, somehow had a slight suggestion of an elfin appearance in the shape of his eyes and ears, as well as the contours of his cheekbones.

"There's quite a tale behind that old bitch," he said, draining the last of his beer and then puffing on his ancient clay pipe, "You lads interested in hearing it?"

Tom and Alistair looked at each other.

Guessing at the price of the tale, Tom offered to buy the old man a pint. He accepted with alacrity, grinning toothily. Before Tom could move, Bram deftly intercepted the request, gesticulating energetically at the landlady, and then going over to collect the beer and pay. Bram placed the glass on their table, a clear invitation for the old man to pull over his chair to join them. The older man drank deeply and appreciatively from the newly-delivered pint, then knocked out the embers from his pipe into the stone ashtray and started refilling it from a pouch taken from his pocket.

"The name's Ged," the old boy began, stuffing tobacco into his pipe dexterously, "Folks hereabouts call me Old Ged, though I'm not as ancient as some people would have you believe. I've been, well, I guess you would call me a gamekeeper. And a hunter too, from time to time. I've hunted all sorted of game over the years. But this wily old bat" - he indicated the mounted head over the fireplace - "nearly did me in just a year or two ago."

"So, what is that creature?" Alistair pressed.