Bridge of Stone and Magic: Chapter 3

The trip to France went astonishingly smoothly. Bret, Kevin and Tanji were collected at Charles de Gaulle airport by a board-carrying driver with a large and very black diesel Mercedes, who drove the three of them at surprising speed along the well-maintained roads east of Paris. The large car, and its vaguely official appearance, effortlessly persuaded even the most recalcitrant of drivers in the fast lane to pull in as soon as a gap in the slow-moving traffic was available.

The road trip was boring in the extreme. Bret was in the front seat next to the driver - 'riding shotgun', as Kevin had heard it described. He and Tanji had been cautioned by Bret not to discuss anything unless they were completely alone, and the other man seemed to be too caught up in his own thoughts to engage in very much casual conversation.

Kevin sat next to Tanji in the back of the car. She seemed to be rather tired for some reason. He would occasionally taking her hand in his own and squeezing it gently in a reassuring kind of way. This had the desired effect of invoking a smile but Tanji too seemed rather distant today.

As Tanji dozed fitfully, Kevin stared out of the window in a glazed-over kind of way at the scenery rushing past, his boredom only slightly enlivened by realising that the globular growths of green leaves in the otherwise bare trees were very probably Mistletoe. Kevin recalled dimly that the Druids collected this evergreen semi-parasitic plant for some reason, but could not quite recall what the purpose of that harvest actually was.

It also occurred to him that the small areas of woodland visible from the main road were probably rather difficult to access without screaming to a halt on a busy highway. But someone must be going to these places, at least occasionally, presumably by some back route. The rusted wreck of a van wedged into the edge of a coppice he had just noticed could not have got there from the road they were currently using.

Almost unexpectedly, their driver pulled off the main road and paid the toll electronically without stopping at the booth. After that, they drove more sedately along country roads, through row after row of well-tended vines, supported on wires tautened across the length of the vineyards, and now just beginning to show green shoots after the winter.

From reading the road signs, Kevin had come to the conclusion that they were heading for Epernay. He knew this was the centre of the Champagne area, where the drink of the same name came from, but wondered why they had come all this way. He could not imagine that Bret was suddenly in need of a few bottles of sparkling plonk.

It came as quite a relief to finally roll up outside the black-painted wrought-iron gates of a grand champagne house. It seemed that they were expected, as the gates opened automatically after a few seconds.

A smartly-dressed young woman came down the steps to meet them. She was attired head-to-foot in fashionably black clothing and was equipped with one of those short-cut hairstyles that ought, Kevin thought, to look boyish, but somehow managed to remain both feminine and very French.

While Kevin eased himself from the car and stretched ungracefully, watching Tanji gradually waking up with mild concern, Bret had leapt fluidly from the vehicle and was already speaking urgently to the Frenchwoman.

Kevin was not entirely surprised to hear Bret speaking French, apparently fluently, or at least much better and faster than himself. His schoolboy French was very poor, being taught, as was the standards of the time, as an academic subject, not as a conversational skill. Kevin found it very hard - nigh-on impossible - to follow the conversation.

"Can you understand what Bret's saying?" Kevin asked Tanji urgently.

"Sort-of," she replied, "My French is very, err, rusty. I've not spoken it since I left the Guild school the first time - and that was years ago."

"Well, he seems to be negotiating for a private tour of the cellars."

Seemingly satisfied, Bret turned back to Kevin and Tanji. He introduced the young woman as Millie, and explained that she was a tourist guide for the Champagne House. He also outlined that she had been commissioned to assist Bret and his companions in their exploration of the underground caverns, the Caves, below the rather grand Champagne house.

Smiling professionally, and seamlessly switching to accented but understandable English for the benefit of Kevin and Tanji, the guide collected a couple of electric torches and handed one to Bret. She offered the other one to Kevin, who took it unenthusiastically.

Following the thoroughly modern Millie, Kevin and the others were guided through the airy and stylish foyer, decorated with arty advertising posters for the champagne brands promulgated by this company. The guide directed them towards a stairwell in the floor, which led down several wide and steep flights of stairs.

The transition from smooth modern walls painted in a fashionable shade of pale pink to rough stone foundations was both sudden and unexpected. Kevin found the drop in temperature was very noticeable and he was glad he was still wearing his sweater. Tanji stopped a moment to wrap her Lyndesfarne cloak around her shoulders.

Millie, clearly already engaged in automatic tourist guide mode, explained that the cellars felt cool in summer and warm in winter, the temperature always hovering around ten degrees Celsius. Apparently, this thermal stability was essential to the proper maturing of the wine. 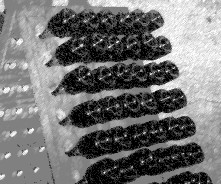 She also explained that these tunnels had been dug over a period of several centuries specifically to allow the bottled champagne to be stored for years. There were now eighteen miles of underground cellars, carved from the soft chalk and reinforced in places by brick arches. Kevin wondered idly whether this environment would be familiar and comfortable to people from Lyndesfarne in the olden days, although probably a bit dark and dank.

The four of them spent an interminable time walking the echoing tunnels, which were damp in places after the recent rains where the water had seeped through the porous chalk walls. There were arches and openings everywhere, and many tunnels included tiny arched alcoves at regular intervals which were occupied by dim electric lights. The passageways and tunnels all looked very similar to Kevin, and he imagined it would be rather easy to get lost down here.

Even so, Bret seemed to know where he was going. After a while, he thanked the guide for her assistance and indicated that he was happy to continue the exploration without her assistance. Millie mouthed a few pleasantries and turned back the way they had come, rapidly disappearing into the gloom with her echoing footsteps receding swiftly into silence.

Both Kevin and Tanji were unsure as to the wisdom of this move. Kevin gripped his electric torch as if his life depended upon it with one hand and kept a firm grasp on Tanji's hand with the other. It suddenly occurred to him that, apart from Millie, he had not seen anyone else in these Caves during the entire visit.

Appearing entirely unconcerned, and followed closely by Kevin and Tanji, Bret turned into a short corridor in an area where the provision of lighting was even more sporadic than usual. The passageway ended almost immediately. Even in the half-light, the end of the tunnel looked to Kevin rather different from the surfaces they had been passing hitherto.

The miles of passageways they had already walked were mostly smooth cut chalk, with ancient and in some cases rather corroded brickwork at junctions and occasional areas of reinforced concrete where modern repairs had been made to the antique tunnels.

The end of this particular tunnel was a jumble of chalk and bricks, tightly packed together. The bricks were at odd angles, not laid flat and level, and looked as if they of slightly different manufacture than those used to support the ceiling elsewhere.

It looked to Kevin as if there had been a cave-in, but no attempt had been made to remove the debris. The strangest thing of all was that the surface of the blockage was almost completely smooth, as if chalk and brick had been sliced by some huge sharp blade shortly after the cave-in.

Kevin laid a hand on the surface. He could feel the different textures of the damp chalk and the smoothly polished cut brick, glinting in the torchlight. There was nothing else to feel - no movement, no vibration. He almost expected something, and felt obscurely disappointed not to feel anything. A whisper of recognition ran though his mind.

"What is it?" He asked Bret. He could see that Tanji was also exceptionally interested in this question.

"Well, it was at one time," Bret began, "A crossing, a passageway to my World."

Kevin nodded slowly. Tanji seemed surprised, and came up to the odd wall to take a closer look, also running her hand over the oddly-featured surface.

Kevin had already had his suspicions, now confirmed, and turned back to Bret to ask another question.

"No longer working, then?"

"But I thought that crossings tended to blow up when they were removed?"

Bret explained that this crossing was underneath a populous small town. Extreme care had been taken to avoid any violent event. There was inevitably a certain amount of fracturing of the rocks, hence the debris which had blocked this passageway briefly before the more complete block of solid chalk had replaced the opening to the world of Lyndesfarne as the crossing finally closed.

"All very smoothly done," Bret concluded, "And almost no-one noticed. Just a few rumbling noises and a tremor or two."

The site of the crossing, Bret suggested, now formed the north-western edge of a network of tunnels which were used in the manufacture and storage of champagne. Kevin imagined that there were superstitious - or perhaps other, more practical - reasons for not wanting to dig further tunnels into rock which, until recently, had not actually been there.

At Bret's prompting, Kevin and Tanji explored a large and darkened chamber, set to one side of the strange wall and connected by several doorways and other openings into the corridor. Bret explained that this was once a Guard Room, housing the equivalent of the modern-day Guardians checking on those making the crossing.

"So why are we here, exactly?" Kevin pressed.

Bret was quiet for a long moment. Kevin found himself listening to the occasional drip of water, the only sound to break the silence.

"Well, there are several reasons," Bret resumed eventually, "One simple one is that I wanted to re-assure myself that this crossing really is closed - is still closed, I should say."

"But surely a new crossing could be anywhere?" Kevin pressed.

"Well, yes, true - but there are some complex reasons why I wanted to look here."

Bret explained that, in theory, there are some conditions where it was easier to re-establish an old crossing rather than to build an entirely new one, but only if the crossing had been previously carefully closed. Under favourable circumstances, he suggested, it might be possible to re-establish it in less than a year.

"As far as I know," Bret continued, "This has never been done. There are no official records of any such careful closure."

"So what's the problem?" Kevin persisted.

"This letter," he almost shouted, vehemently waving a parchment at him, "This letter suggests that this crossing was closed in such a way, and this was kept secret."

He let the hand holding the letter fall to his side in an uncharacteristically dramatic manner.

"And I don't know who sent the letter, or why!"