Bridge of Stone and Magic: Chapter 28

"History tells us that the Emperor Napoleon Bonaparte was very fond of champagne," Bret began, with what Kevin felt was a familiar air of settling down to tell a tale.

"It was partially his influence that gave the Champagne region around Reims" - Bret pronounced the name with much rolling of the R's - "and Epernay came to have so much prestige in the wine trade."

Kevin sat back, recognising the cue. Tanji also relaxed, seating herself comfortably on her side next to him on the sofa with her legs tucked up. They were seated in the Orangery at the grand hotel in Reims, comfortably replete after the extensive, not to say expansive, dinner. Tiny cups of Café Express and delicate Petit Fours sat as yet untouched in front of them, and each of them clutched a large balloon containing a generous measure of a very fine Armagnac.

The Orangery was cool and dimly-lit at this late hour, and they were the only occupants. They had been almost the last to leave the dining room, and it seemed that most of the other patrons had retired to bed. The waiting staff, discreet and patient as ever, were out of sight, although Kevin was sure that a single ring of the tiny bell that stood on the table next to the coffee would bring an immediate response. 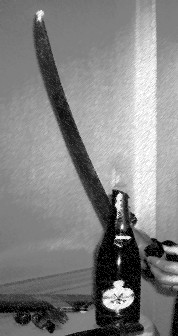 "Well, some people would say that it's a waste of good Champagne," he replied, "Although, to be fair, if it's done properly you hardly spill a drop."

"Yes, but what is it?" Kevin pressed.

"It's a method of opening Champagne bottles invented by Napoleon and his cronies," he explained, "Basically, it's a way of opening a bottle using a sabre."

"Well, it needs to be a fairly heavy sword, and the curved sabres carried by cavalry in that era were more-or-less perfect. And, no, you don't try and cut off the top with a sweeping cut," he added to forestall Kevin's objection, "The technique is to slide the sabre along the bottle from the base to the cork. The blade catches the rim that secures the wire retainer and cracks the glass. If done properly, the bottle neck containing the cork should break off cleanly and allow the wine to be poured.

"You've got a mixture of splintered glass and foaming wine under pressure in your lap," Bret replied.

"Quite. Napoleon liked his Champagne. Well, that's what the history books say," he continued, lowering his voice conspiratorially, "But there was another reason that the Emperor was so interested in this part of the world." Bret's armchair was no more than a few feet from the sofa occupied by Kevin and Tanji, but still Kevin strained to hear the other man's voice.

"It seems that Napoleon had heard rumours of the crossing to the Other World. How this happened no-one knows, although it is thought that, under his despotic rule, many people were keen to curry favour. However it happened, the myths were enough to gain his ear. Curious, Napoleon gave instructions to send out spies and informers, with almost no success, but unfortunately just enough to keep the Emperor's interest."

Bret swirled the brandy around in its glass and sipped appreciatively. Tanji leant forward and took the smallest on the delicate Petit Fours, popping it into her mouth much to Kevin's amazement. He was personally convinced he would not be able to eat another thing for at least a week.

"Napoleon was frustrated," Bret resumed, "Something he was not used to. He found the time to investigate in person, an intent disguised by his genuine taste for the finest Champagne and his interest in the techniques used to produce the wine. He and his followers patronised the Grand Houses, investigated the vineyards and inspected the cellars. It seemed that no secret would for long be hidden from his searches."

Kevin sipped at his own brandy while Bret continued.

"We had for a long time many allies and agents in the Houses. Our spies reported that the Emperor was - perhaps understandably - fascinated by the presence of another whole world, a secret world, one over which a megalomaniac like him would wish to exert a degree of control, perhaps even attempt a conquest. He would naturally find irresistible even the suggestion of such a possibility."

Kevin found a moment to reflect that Bret was such an accomplished teller of tales, and wondered whether there was some cultural aspect of the Other World which encouraged such behaviour, or was it just that Bret himself found comfortable. He could not tell. He sat back with his brandy glass in his hand and listened carefully to what Bret had to say.

"Of course an Emperor does not ever travel alone, but was always accompanied by a large cohort, a small army of staff and servants and general hangers-on, and which of course included a considerable contingent of officers and guards. The presence of large numbers of inquisitive individuals inevitably made the operations of the crossing difficult to hide, so when Napoleon was in town all but the most critical of traffic between the Two Worlds was stopped."

Bret again swirled the bandy in his glass and studied the fingers of the amber fluid as they ran down the sides of the glass.

"For long periods, the export of Champagne effectively ceased, which had the effect of making much more of the wine available in this world as the Houses strove to minimise their losses. So, for example, more of this wine was shipped to the British Isles, despite the ongoing animosity between the British government and Napoleonic France. The wine became very popular in your country, and indeed it remains so today."

Bret paused while Tanji again took one of the tiny Petit Fours from the plate on the table.

"At the time, many people in my world expected that the Emperor's interest would wane after a time. After all, he did have all of the complexities of a fractious empire and external enemies to worry about. All they would have to do was to keep a low profile and wait it out."

"Perhaps unsurprisingly, there was a great deal of dithering and indecisiveness amongst those charged with the governance of the crossing. One aspect agreed early was that, in the event of a decision to close the crossing, the action taken when Napoleon and his cohort was not in the vicinity, since they did not want to take the risk of discovery even at that late stage."

Bret took another sip from his brandy glass.

"When Napoleon had left after his third visit, there was a collective sign of relief. Many hoped that the Emperor would not return, that he would be distracted by more pressing events in his current demesnes, his wars and conquests, that he would forget about these strange and still-unverified myths and rumours. But it was not to be. The news came that Napoleon was to return and, after long and heated debate long into the night, the decision was made. The crossing would be closed."

Bret put his brandy glass down on the table and leaned forward earnestly.

"A critical debate was the manner in which the cross was to be closed," he said softly, "All crossings can be closed very quickly, almost in a heartbeat; this is an integral part of the design of the crossing magic. But this kind of emergency closure is explosive, enormously destructive and, in caves underneath a populated area, such an explosion would undoubtedly collapse buildings for miles around and quite possible kill or injure many people. It was decided at an early stage that such an emergency closure was neither necessary nor appropriate."

Tanji was motionless, clearly listening intently. Kevin felt like his ears were sticking up in order not to miss a word.

"Even so, there was a further choice to be made about the manner of the closure. A passage between the Two Worlds can be closed disruptively, but not explosively, in such a way that they cannot ever be used again. Or, it can be closed in a manner such that it can relatively easily be re-opened. The last approach is a great deal more complex and requires a great deal of subtlety and skill in the deployment of the necessary magic. Indeed, it cannot be done by a single person; it would require the skills of at least three experts working very closely together."

"By contrast, the emergency closure procedure can be done very quickly, by anybody who knows the secret - but rather simple - gestures required. Clearly, this is a secret limited to a few of the more senior Guardians at a crossing. But even so, there is no special skill or knowledge of magic is needed to invoke the magic."

Bret leaned forward and lowered his voice even more.

"Now, the official records from the time make it clear that the second process - closure in a way that did not cause huge disruption but nevertheless prevented it from ever being re-opened - was the one officially sanctioned. A Senior Convenor - from the organisation which was the forerunner of the Board of Control - was dispatched to carry out this direction, to close the crossing as quickly as possible, before Napoleon and his cohort arrived, and to do so in a fashion that prohibited it from ever being re-opened."

Bret took an unsealed envelope from inside his shirt, opened it and unfolded several sheets of paper. As far as Kevin could tell, they were modern Photostat copies of pages of some old letter, one filled with crabbed and spidery handwriting.

"Now I am being led to believe that this instruction was disobeyed," Bret said, indicating the unfolded sheets, "This letter contains a detailed description - in an authentically archaic written form of English, I might add - of the fact that three people invoked the closure of the crossing, as well as a detailed description of the gestures used. The account was clearly transcribed by someone who did not know what they were witnessing, but it is obvious even to the most cursory glance that the number and complexity of the motions meant that the crossing was closed in a way that meant it was intended to be reopened."

"And it has presumably been that way for several centuries."