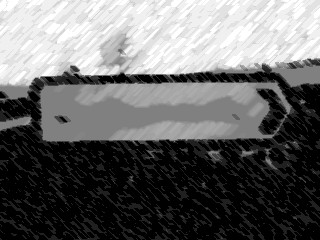 Kevin's first trip to Lyndesfarne was memorable, to say the least. He had driven up the main road from the south, in the rain, following the detailed directions he had received from Professor Call-me-Alan. Even with the instructions, he drove past the turning which led to the causeway twice. The junction, when he found it, was marked by a small sign so weathered as to be almost illegible. They really don't want to advertise their presence, do they, thought Kevin.

The road to the Island causeway and bridge seemed at first glance narrow and rarely-travelled, barely wide enough for vehicles to pass easily. This was deceptive, since the oncoming traffic was quite heavy, and Kevin found himself slowing down several times when the windscreen wipers failed to cope with spray from passing cars and lorries. There were a surprising number of large trucks and articulated vehicles on the road, and he wondered vaguely where all the traffic was coming from.

The road passed over several ancient stone bridges, barely wide enough to cope with modern traffic, and covered with moss and lichen. This made them nearly as green as the overgrown hedgerows alongside the road. The highway also included a feature unusual for the English countryside: a footpath along its entire length. It appeared that lots of people went to and from the Island on foot.

There was little habitation along the road. Every now and then, set back into the hedgerows, there would be a stone house, very solid and respectable-looking. There was a slight suggestion, it seemed to Kevin, not of abandonment but rather of infrequent occupation, like a Mediterranean holiday villa in February.

Kevin piloted the Volvo around one last oncoming heavy goods vehicle, and pulled into the causeway car park. There were only a few vehicles parked up, and he selected a spot close to the exit. He recognised Bret, who was wrapped in a cape and sheltering from the damp weather under a tree in the corner of the car park.

Kevin was still not sure what to make of Bret, and he greeted him cautiously with a perfunctory handshake and some mumbled pleasantries. Kevin drew on his modern Gortex anorak and they set out together along the causeway.

On this occasion, the weather was heavily overcast, with a light drizzle of rain and featureless flat grey skies in every direction. It was impossible to tell where the sea met the sky. There was almost no wind, and tendrils of mist swirled over the causeway. Only the muffled sound of the sea and the occasional bird cry could be heard. There was little traffic, just a few pedestrians and a single wagon could be made out ahead of them. Dead spooky, thought Kevin.

The two men rounded a curve in the causeway and the arches of the bridge loomed out of the mist in front of them. Kevin slowed, mouth open, to take in the sight of what lay before him.

"Impressive, isn't it?" said Bret, who seemed to have noted Kevin's reaction.

Kevin pulled himself together and tried to evaluate the construction professionally. His immediate reaction was that the structure was right on the edge of stone-built bridge technology. He would be hard pushed to design a bridge like this, given the constraints of the materials available, even with the benefits of modern computer aided design techniques. And they built this thing several hundred years ago, he thought, quite astounding. 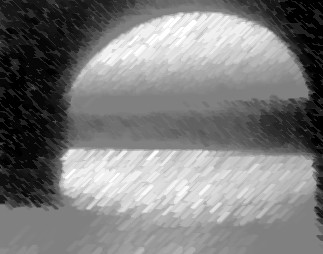 The bridge consisted of three arches, with a vast central span crossing the deep water of the straights. The main arch seemed impossibly long and high, at least two hundred feet across and perhaps sixty feet in the air. There were smaller secondary arches on either side, perhaps seventy or eighty feet each, spreading the load from the main arch, and terminating in vast stone buttresses that both anchored the bridge and provided the ramps which allowed travellers to cross.

A stone bridge, like a masonry building, is essentially a machine held up by gravity. Every part must be in compression, otherwise joints between stone blocks simply opened up, mortar or no mortar. Given the size of the old bridge, the weight of the central arch must be immense, and all that weight had to be spread evenly by the triple arches and bulwarks. The weight distribution has to be carefully computed, otherwise the arch would either explode or collapse, and the force on any individual block cannot be too high, otherwise the stone simply disintegrated under pressure.

"It's got to be reinforced in some way!" exclaimed Kevin.

"It is," replied Bret calmly, "Indeed, it is exactly these reinforcements we are here to study today."

Bret's voice had an unexpectedly deep and rounded bass tone, which contrasted with his boyish looks. Kevin glanced at Bret and then back at the bridge. As his eye ran along the length of the bridge stretching away from him, he noticed a change in the appearance of the masonry. The dull stonework on the mainland side of the central arch seemed to mutate on the far side, with orange flecks to be found seemingly deep within the solid stones, just visible in the haze and drizzle.

Even from this distance, the flecks gave the impression of continual movement, but only when glimpsed out of the corner of the eye. When Kevin watched directly, the sparks seemed entirely motionless. Like orange fireflies, but somehow inside the rock itself, he thought. After dark, this bridge must light up like a Christmas tree.

Kevin would later discover that the orange sparks were always only just visible, even in complete darkness. On the rare days of brilliant sunshine, the motes still appeared just bright enough to be seen.

"What on earth are the sparks in the rock?" Kevin asked.

"Well, they are the reinforcements," explained Bret, "at least on that side of the bridge." 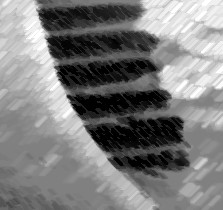 "But what are they?"

Bret snorted. "There's no easy way to translate. The word I've heard used is 'sprites', although there's nothing actually living in the rock. It's a manifestation of - well, I understand the word you use is 'magic'."

The two men approached the foot of the bridge. Rather than crossing, Bret directed Kevin alongside the bulwarks, so that they could look up at the underside of the bridge.

Kevin could see long grooves cut into the stonework, following the line of the arches. There were regular cross-cuts and the grooves were now filled with mortar.

"Ah," said Kevin, light dawning, "Steel strengthening rods, with cross-pieces. Placed in grooves, and tensioned up as the arch was constructed. Held in place and protected with cement, to prevent rust."

Bret smiled. "I'm sure you're right. When the bridge was built, I'm told, this was the best technology available."

"But why didn't you use the same approach on your side?" asked Kevin.

"We couldn't make a material strong enough in tension. The sprites in the rock bind the stones together directly."

"But why not just use steel reinforcement throughout?" Kevin persisted.

"Because steel's not effective on that side of the bridge." continued Bret, "The alloy technology doesn't work. The steel reverts to soft iron, and that's neither strong enough nor stiff enough to support the arches."

Kevin turned and studied the bridge construction again. He could see the reinforcement grooves stretching just beyond the apex of the central arch on the island side, while the orange sprites in the stone petered out just on the Mainland side of the highest point.

"So," mused Kevin, half to himself, "Two types of reinforcements, mutually incompatible, which overlap for a few feet in the middle. And the weight of the arch is supported equally by the two halves."

"That's right," said Bret, interrupting Kevin's thoughts, "And our job is to build a much bigger bridge, in two halves, with two different approaches, each of which simply cannot work on the other half."

"No problem there then," responded Kevin sarcastically.

Bret looked strangely at him, then caught sight of his half-grin and relaxed.

Actually, Kevin did have the beginnings of an idea on how to make a new bridge work. He knew several techniques of making a half-bridge entirely self-supporting, so that there was very little weight on the centre point. Indeed, he had used just such an approach in the New Zealand crossing, where the largest section of the crossing was supported almost entirely at one end. So, he considered, if Bret can suggest an analogous approach, we can together build something where the central section, where neither magic nor technology are entirely trustworthy, need not be very strong: just enough to support its own weight and that of the traffic. 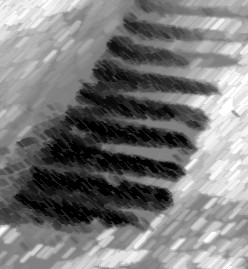 The two men returned to the foot of the bridge, and started the walk up the slope and onto the nearest arch. As they walked on, Kevin studied the bridge construction. It was fabricated from blocks of hard granite, now lichen-encrusted and worn by the elements. The blocks, he was to discover later, had been quarried locally on both sides of the straights, and then assembled over an elaborate wooden scaffolding. This must have been a heroic effort, Kevin noted, against the weather and environment. Even so, it was still possible to see the very high quality stonework on both causeway and bridge, with stone blocks cut individually to size, to fit together precisely with very little mortar required.

The two men walked on together, making their way up the slope. Kevin noted that the stone flags underfoot had become somewhat rutted and uneven with age and the onslaught of centuries of traffic. Kevin stopped at the centre of the bridge, just where the orange flecks started to become visible within the flags. He leaned over the stone breastworks, and looked down. Far below, the gently swirling water looked deep and murky.

"How deep is the water here?" he asked Bret.

"I don't know," replied Bret, "I don't think anyone has been able to measure it. Certainly, no one's found an anchor rope long enough to reach the bottom."

"It wouldn't work, right here in the centre of the straights. On this side, your instruments indicate that the channel gets rapidly deeper, with a sharp drop-off just beyond that pier."

Bret indicated the stonework supporting the central arch on the Mainland side.

"We can make similar measurements over here," he continued, indicating the other main arch support, "and find a similar profile. But right here, in the middle, neither your techniques nor ours work. For all we know, it might be literally bottomless."