Death on the New Bridge: Chapter 36

The fire flickered lower, although Kevin suspected this was a deliberate - and magical - effect rather than anything to do with the exhaustion of the fuel. Tanji was by now snoring gently on his shoulder and he was beginning to wonder if this was the moment when he should gently guide her to their bed.

Bret and her Mother sat quietly, motionless, gazing that their two guests; everyone else had long since retired to their bedrooms. Kevin got the impression that there was just one more tale they wanted to tell this evening.

Kevin smiled and nodded, then held out his glass. Bret splashed just a little more of the particularly pleasant red wine into it. Settling back contentedly on the sofa, Kevin made sure that Tanji's head and shoulders were comfortable on his lap. 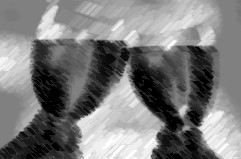 Bret too sat back easily in her chair, her wineglass cupped in one hand.

"The traditional occupation of certain families - to preserve the secrets of the Two Worlds - is one which has persisted down the ages," she resumed, "And my own family" - she nodded at her mother - "has been involved in one way or another for countless generations."

Bret paused to sip at her glass, then resumed.

"So, here's a story I've heard many times over the years, one that involves my grandparents - my mother's mother - and I'm sure she'll correct me if I get any aspect wrong."

The Ferryman smiled at this last, raising her glass in silent salute.

"My tale is set nearly sixty years ago, shortly after that period in your world's history known as the Second World War. It concerns my grandmother's brother - Bram - who was quite a rogue and an adventurer at that time. He became famous for numerous exploits - many of which I heard as bedtime stories as a child." Bret paused, looking wistful for a moment.

"Anyway, during the World War, Bram managed to get himself sent to your world - indeed, to several battle zones - to report on the progress of the War at first hand, disguised as a British soldier."

"So he was a spy?" Kevin asked, breathlessly.

"We'd prefer to think of him as a journalist, an intrepid reporter from an interested neutral party," Bret replied, with a hint of irony in his voice, "Although there were some threats from various quarters to the security of the crossing itself. So, the Boards and Guilds found themselves very loosely allied to the official British government, in a very low-key kind of way. Out of necessity, the Board of Control at the time found it necessary to intervene, to protect our interests, although I don't think I should go into these just now."

Kevin smirked. He had an inkling of the kind of political machinations that might well have been undertaken by both sides in such an arrangement.

"So," Bret continued, "During his time in the army, my Great-Uncle Bram met and befriended two young men from your world, called Tom and Alasdair. The three of them got into all sorts of scrapes during the War - so many stories there!"

She shrugged, seeming caught up in her own memories of bedtime stories.

"Another time, maybe," she continued eventually, "When it was all over and they had left the Army, the three young men travelled together for a while in North East England."

"Uh-huh," Kevin murmured just a little sleepily, already beginning to wonder what was to come.

"It seems that Bram had some plans for his companions," Bret narrated in a measured voice, "First, he gently introduced them to the reality of our World and the technologies - magic, you might say - that are commonplace here."

Kevin had begun to suspect that there was a well-established and carefully-managed process of discovery, allowing an individual to slowly come to terms with the reality of the Other World. They must have had considerable practice over the years, he mused; indeed, he realised that he himself must have been subjected to some variant of this process, intended to minimise the culture shock, the potentially catastrophic impact on the sanity of a newbie.

"Through Bram's influence, they were inducted into the Guardians, in your world," Bret said, "They underwent the basic training that was then, and indeed still is, required of recruits into that organisation."

Kevin had also wondered about recruitment into the Guardians. It seemed that a great deal of caution was used, understandably enough, and he supposed that networks of recommendations would be used, much like that which was evidently used for students and staff members at NISSA.

Bret sipped again at her wine, then resumed.

"The same training is required in order to join certain related groups," she added, "Such as the Guides."

"Who are the Guides?" he asked.

"They're the equivalent of the Guild of Directions, in your world," she replied, "Helping Visitors from this world to find their way around in yours."

Kevin nodded. It sounded like just another example of the, he imagined, deliberate symmetry of governance organisations in the Two Worlds.

"Anyway," Bret resumed, "Alistair was also introduced to Yise, Bram's younger sister. In the way of these things, the two young people fell in love and got married."

Bret was silent for a moment, staring at the fire.

"So, back in the early nineteen-fifties, things seemed to have settled down. Alistair and Yise had wed, and she was pregnant - with my mother, of course," Bret added, nodding at the Ferryman still sitting quietly in her chair, "Tom had settled into his role in the Guardian force - already a Corporal and with excellent prospects to progress further. He was reputed to be a hit with the local ladies, although still found time to visit his friend Alasdair and his new wife."

"Even Bram - wild Bram, lucky Bram - seemed to have conquered his wanderlust and appeared to be on the verge of settling down. He had been walking out with a local girl and the prospect of another wedding seemed to be looming."

"Then all of a sudden, something unexpected happened. One wild evening, Bram and Tom turned up at Alasdair and Yise's house, excited by something he seemed to find difficult to communicate. The three men talked well into the night - some half-baked theories about a despot, a mystery group, and threats to the crossing and the Two Worlds."

"It seems that Yise had gone to bed early, tired and heavily pregnant, leaving the men to their talk. Much later, she said that she had been woken by Alasdair with much insistent shaking, to tell her that there was something he had to do, and with a promise to be back in the morning."

"But, in the morning, Alasdair, and Bram and Tom, were still absent, and they were never seen again - alive or dead."

Bret's mother shifted in her seat.

"I never knew my father," the Ferryman said sadly, "All this happened before I was born. My mother - Yise - never forgot her husband, and she would never accept she would not see him again, or her brother. After they disappeared, she travelled extensively in both worlds, usually in the guise of a Messenger, searching for them."

She stared into the fire for a moment, then continued.

"Sometimes she would take me with her, especially as I got older. When we travelled, she talked all the time - stories and theories and explanations, some of which sounded far-fetched to me, even at the time. Even now, I'm not sure whether she was convinced he was still alive or whether she just wanted to find out what happened to him. As far as I know, she never achieved either aim."

"When she died, her last words were, 'find out what happened to Alasdair and Bram, for me'," she continued sadly, "I've not been able to fulfil that last request. We still have no idea what happened to three courageous and resourceful young men who had survived a war, and were definitely no strangers to dangerous adventures."

The Ferryman and her daughter were silent for a few moments, then Bret took up the tale.

"And then there was Tom's family. We know his mother was from your world, born and brought up in a suburb of Newcastle. It seems that Tom's father was from our World, although we've never been entirely sure exactly who he was. In any case, he appears to have married Tom's mother, set up house together, then the two of them disappeared in mysterious circumstances. Tom was brought up an orphan, by his grandmother, in the period before the War."

"So, it seems that it is a perilous existence for those who life is connected to the crossing and the Two Worlds. People have died - indeed, continue to do so - in mysterious circumstances."

"Something's going on, even now," she said bluntly, "And we still don't know what it is."

Tanji stirred slightly in Kevin's lap. He looked down and realised that her eyes were open, that she had been awake for some time, listening quietly to Bret's words. He could see tears forming in her eyes, and he moved to comfort her as best he could.

In the silence of the darkened room, Kevin once again wondered what happened to Tanji's parents all those years ago. Perhaps it was something similar? He had discreetly refrained from quizzing her on this topic, sensing some deep emotion, but he still hoped that she would one day tell him about it, unprompted.

The Ferryman herself yawned and stretched in an uninhibited fashion which surprised Kevin, even in his near somnambulant state.

"Now I think it's time for all of us to get a little sleep."